RESULTS 25 to 28, and MATCHES 29 to 32.
So, what do you know!
Something interesting happens in the Big Bash League, and twitter comes alight!
Quickly followed by a return to BBL snoremal service.

And here it is, in vivid audio, courtesy of @rhettrospective...

listen to ‘Warne ’ on Audioboo


Quite a ridiculous turn of events! If this altercation was genuine 'heat-of-battle' stuff, or even a contrived bit of game-playing, it is a shocking thing to happen to cricket. It is very unsportsmanlike behaviour, in a game renowned for being very much a 'gentleman's pursuit' (no offence to the women that play, the term is not used to imply cricket conduct is gender-specific, but more about the 'mannered' nature of the game).

And from all this farce/fracas, Warne getting a one match ban (where he wont play against the winless, luckless, hapless, hopeless Thunder) is the most newsworthy result.


OH YES... and somewhere among this set of games... a Sydney team won against a non-Sydney team!
Wonders will never cease.

Results here, and a shocker of a week with 1 from 4 the return! Season to date running at 50%.

The Sixers still, mathematically, can make the finals.
Its a big ask, and if they do wouldn't it just re-inforce the image of how much of a shambles-farce this competition is?
So...
...GO SIXERS!! 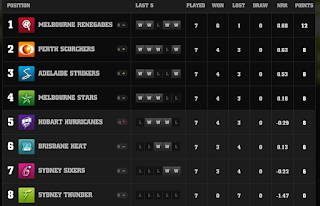 And because we do things differently here compared to BBL HQ... here is the official BBL table (click to expand).

Again, its Melbourne and the smaller regional capital cities in the first 5 places.

The key to the finals will be for Perth Adelaide, Stars and 'Canes to get that 5th win, and for the Heat and Sixers to get a 4th win and have a high NRR.


TIPS:
And the next matches tips are as below... its the final preliminary round!

Let's go through them one by one:

29: Stars v Thunder   Not a dead rubber as such, but no real reason for the Thunder to turn up... Pride? Bah! Stars though need to win to ensure a finals spot.

30: Renegades v Sixers   Renegades in the finals, no desperation needed from them. Sixers need to win and win well to have any finals hope.

31: Strikers v Scorchers   A loss by either team may still keep them in the finals, but you would want to win to be certain of it (and maybe score a home final too).

32: Hurricanes v Heat   Winner takes all elimination final. Win this for a finals spot, lose and its all over. Kinda... Heat may still miss the finals if they win too.
Posted by The FMI at 09:19