RESULTS 29 to 32, and THE SEMI-FINALS.
And that's the end of the preliminary rounds of this seasons 'Fried Chicken' BBL T20 series.
The finals are next... three games before its all over.

And the nation can catch its breath and get back to normal... maybe.


Results here, and 2 from 4 finish to the year. The season tipping was 50%! T20 tipping is a difficult beast.

Sydney teams fail to win again... to no-ones surprise... and that includes the disaster that was the Thunder meltdown in chasing the Stars (where Chris Gayle scored just under half the team total). What a disaster.
And both Sydney teams were bowled out.
So too, Adelaide... failing to make the finals by imploding - 'Sydney Thunder' style.

And because we do things differently here compared to BBL HQ... here is the official BBL table (click to expand). 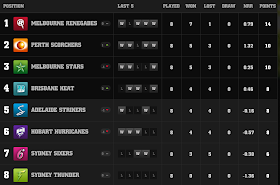 And it is interesting that both of our tables match the official top 4 through to the finals.

The rankings also align with the BBL table as well.

Cant recall that happening before!

The other good tip...
Two semis, one final... total of three games to go before we release ourselves from this CricketMaths hell!
The FMI at 11:24
Share