Last week, we wrote on the topic of balance and fairness in the fixture, and that a 17 round season is not a viable solution. This came in response to end of season chatter from people such as Gary March, Richmond President.

Also during the end-of-season period, more column inches were filled discussing imbalances in the finances that work in and around the AFL and its member clubs.
And for us here at the FootyMaths Institute, it was none other than Matthew Lloyd, yes, that Matthew Lloyd in The Age during the 2012 Finals Series, that dared to disturb the 'finals spirit' with a home truth or two.

The game is evolving, but the gulf between haves and have-nots in the AFL is widening.

It doesn't matter what role you have in the AFL system, if you stand still for too long, you'll be left behind. This game doesn't evolve from year to year; it evolves from week to week, as every club is trying to get that 1 per cent or more advantage on its opposition.

AFL football is now a year-long business as there is always something to be planning for. All clubs, including the finals teams, are always looking at how they can improve for the next season and the biggest area of growth in the last five years has come in the strength and conditioning departments.

Lloyd's comments resonated with us, as they reflected commentary and analysis conducted (and blogged) before the foundation of the FootyMaths Institute. Two blog pages of analysis showed that divergences in club finances affected the outcomes of games.


And key in these pages and analysis were the charts below. The first chart, immediately below from Blow-out Me Down With A Feather), shows the frequency of results of all games where margins were 60 points or more, plus the average points scored per game as the blue line on the secondary axis.
The interesting point in that chart is that it highlights a continued high scoring rate per game since the 1930's (as shown by the blue line), but that there is a greatly increased incidence of high winning margins, particularly from the late 70's onward, and peaking in 2011.

Looking closer at that period (from Money Can Buy You Wins) and overlaying some of the financial troubles that the clubs and league faced and overcome brings us an interesting result.
Looking at the above chart, the first occurrences of regular wins by massive margins (in the order of 100+ points) coincides with the period of financial instability in the VFL/AFL.


That near two decade period (from about 1980 to 1997) saw;
- The South Melbourne to Sydney [PDF] crisis*,
- The failure of the Ranald Macdonald's 'New Magpies' and a $2.3 million debt,
- The decades long saga [PDF] that was Fitzroy*,
- The troubles at Tigerland marked by the 'Save Our Skins' campaign,
- The Footscray fightback [PDF] from debt and proposed merger to Fitzroy*,
- The Save our Saints campaign, and
- The near Melbourne Hawks merger.


* For more on these issues and background on how money changed football, see Appendix 1 below.


And for what it is worth, the number of times teams lost by over 60 and 100 points in that period is at right. 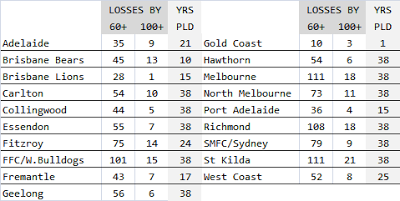 Not really surprising, given what we have outlined earlier.


Also highlighted on that chart is the reduction in +100 point blowout games from about 1997 onward. This coincides (approximately) with the AFL edict on protecting existing clubs through subsidies and financial support, etc.
With the guarantees of survival and funding, the competition was able to be stabilised and move on to its most competitive decade ever.

The accumulated results table (above) for 2000-2009 shows the evenness in the competition, with premierships spread across seven teams, and percentages (for/against) spread between 113.9% to 89.2%.

Only the 60's and 90's come close to balanced decades of football, with 7 teams winning premierships, but the percentage (for/against) are higher in those decades.

Wedged between the above are the 70's and 80's, where finances nearly killed clubs, and premierships were restricted to only the strong, with only 4 teams winning premierships in each of those decades.


All these indicators show that with financial problems, clubs struggle to compete. Historically, these problems have been quite dire (i.e. with clubs facing extinction).
The current threat to imbalance is as Matthew Lloyd says, in off-field spending differences.


"...the gap is still huge in the resources wealthy clubs can put into recruiting compared with those of the poorer clubs. Clubs such as Fremantle and West Coast would have as many as five full-time recruiters, whereas the Western Bulldogs only have two. This is a huge advantage...

This is a huge problem for the AFL, as the gap will only get wider as clubs continue to push the limits and the supporters of clubs like the Brisbane Lions, Port Adelaide, Melbourne and the Bulldogs must fear for what lies ahead for their battling clubs."


Later in the year, echoing Matthew Lloyd, both Sydney Swans Chairman Richard Colless, and incoming Western Bulldogs President Peter Gordon, weighed in with opinion from the boardrooms of clubs that the biggest issue to be addressed by the AFL is in financial imbalance.

''We've had a decade of unbridled growth and good news,'' said Colless, ''but the question now is that still the case? I'm not so sure. You can't have clubs losing $3 million a year, as is the case with Port Adelaide without some alarm bells ringing.''

Interesting that Colless also acknowledges that the 2000's were quite a boon decade for the AFL, though he may not be referring to on-field competitiveness that we ascribed above.

Gordon said there was ''profound concern'' within the industry that the gap between bigger and smaller clubs could widen at an alarming rate, and ''intelligent discussion'' among presidents, chief executives and the AFL was needed urgently''.

''Because in the end, the best model of competition is one where the result of each game is unpredictable,'' he said. ''To do that, you need a measure of equality, and it's become very evident over recent years that there is an almost lineal correlation between the amount of money you've got to spend and success on the field.


Lets just pick out the point of this blog one more time, that is understood by Peter Gordon, and is writ large in The Age...


"...it's become very evident over recent years that there is an almost lineal correlation between the amount of money you've got to spend and success on the field."

As much as we can learn from football's history, about clubs that fail financially off the field, we can now say that about the current football landscape and its member clubs. This clubs that have limited resource to spend off field will struggle on field.
The current policy of the AFL in guaranteeing the clubs' survival (underwriting) is not helping them win the off field war on non-playing resources.


The final article that triggered this blog post was from another Age sports journalist, Jake Niall, which neatly book-ended the series of Age articles (recommend reading, folks!).

"...in 1989, the league was walking the Dogs down the aisle in an arranged marriage with Fitzroy and actively sought to reduce the number of [Melbourne] clubs. In 2012, the AFL has a safety net that protects the vulnerable - read small - clubs.

The years from 1997-2006 were the heady days of football socialism. There was a competitive balance in the competition, courtesy of the draft and a salary cap that was actually enforced. But socialism had its limits. Some clubs were more equal than others, as the blockbusters and free-to-air television coverage confirmed.

While the AFL sought to compensate by handing the poorer clubs a cheque - and by sending them to Canberra and Darwin - it could not control what clubs spent outside of player payments. So began the football department ''arms race'', in which development coaches would multiply, recruiting budgets exploded and the once humble fitness coach was re-invented as ''director of sports science''."


Again, football fans know this, The Age sports writers can see this, and some at AFL board-level know that there is trouble a-foot.


For the future, we look to one benefit that Richard Colless alluded to in the article above...

"The AFL Commission and executive responded to Colless' call for a wide-ranging review of the competition and its structure by confirming it would hold a two-day summit before the start of the 2013 season."

We, and good proportion of the AFL fan-base, await the findings of the review!


There are many voices calling for equity in the AFL, this blog included.
The review in "early 2013" will be an interesting exercise for the AFL.
If they are prepared heed the above calls, the review should create a new path for all 18 AFL clubs, and would create a more dynamic competition where all teams can fight for the flag.

Alternately, they could shift to a Darwinist 'only the strong' approach and re-invent the AFL, perhaps to an elite 10 team competition, which we think would be to the detriment of the AFL, its history, its traditions, and a large portion of its fans.

Or the AFL could bury its head in the sand, ignore the financial disparity and plough on regardless, leaving tough calls for later.

The linked PDF's are an extraordinary collection of documents on the biggest crises that the VFL/AFL experienced... a big read, but a valuable resource.
For further reading, here is another view of those changes and the public reactions, and also articles at the Footy Almanac, such as this.

To re-iterate the extent of the blow-outs, and the changing face of football when gross financial differences were in play, the chart at right picks out the 80 point or more margin games through out the history of the VFL/AFL. A clear explosion from about 1976 onward.

Money had always been thrown around VFL clubs (John Wren looking after Collingwood players for example), but the 70's onward brought a new dynamic. Sponsorship first appeared on football jumpers... and who can forget these footy cards here, as well as begin to claim ground signage. It is also no surprise that the leaders on this front profited nicely over the next years, while those missing jumper sponsorship (St. Kilda, Melbourne, Footscray, Fitzroy and South Melbourne) were to fall away.

It was the era when the media began to influence football, as clubs changed jumper and shorts colours to change their image for colour TV (Melbourne changed from navy blue to a royal blue, Richmond and Essendon both donned shorts that matched their sashes, Footscray also went into red shorts too).


It was also the era of the short lived '10 year rule' that Allen Aylett working to great effect, allowing North Melbourne to pick up their first 2 flags. The 10 year rule was a harbinger of things to come for professional football.