In our previous post, we described the principles we consider key for reform in the AFL, and also a summary of how to achieve some equity. Now, to the detail.

THE DETAIL:
In our proposal, we suggest splitting the 18 teams into 3 conferences, based on ladder position where teams are seeded. Each conference contains 2 of the previous seasons top teams, two mid-table teams and two of the bottom teams. It also includes season-on-season re-drawing of the conferences to ensure ongoing balance.
And for arguments sake, why not name the conferences after three of footballs most famous names from the three key footballing states; Barassi, Farmer and Robran conferences.


SPLIT INTO CONFERENCES
In separating the teams into conferences, the previous seasons ladder is used, and a seeding system is employed to balance the split. The seeding we have chosen [1] will see the following teams in each group.

This seeding selection provides each group with an evenly selected number - two from the top 6 teams, two from the mid-table 6 teams and two from the bottom 6 teams. Also, adding each of the above ladder positions produces the same number – 57. 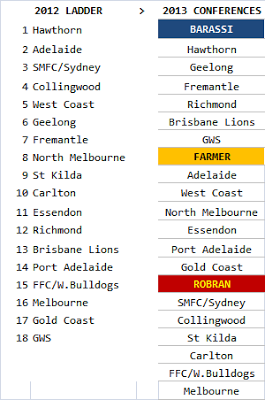 So for the 2013 season, the ladder from the 2012 season would be used to split the teams into the conferences as at right.

In some instances, conferences will be made up of teams spread all over Australia, while others will be more localized.
To overcome any sense of bias in travel, the inter-conference games can be arranged so that those teams that don’t travel so much in their conference will play more 'on the road' games to compensate and balance out travel commitments.

As before, the only ‘fixing’ of this draw is to ensure teams play 11 times at home, and at least 5 times interstate.


In the instance above, the following is immediately detectable:


- there are two interstate teams in one conference, and three in the other two conferences.
- the two Adelaide teams are drawn together, but the two West Australian teams are not together.
- similarly, the two Sydney and Queensland teams are also not drawn together, and
- the scope for Melbourne 'blockbusters' is disrupted as Collingwood won't have 2 games against Essendon, Richmond, Geelong and Hawthorn.
- There is still 2 matches for Collingwood against Carlton and St Kilda, and we propose that scheduling of the draw remain flexible enough that the Anzac Day game can still be reserved for Collingwood and Essendon.

This will alarm some AFL folk, as it has taken away some of the current mandated blockbusters, but as before, we think the AFL is now in a position to no longer lean on those crutches, and to let the scheduling process become just marginally more free.

A simple 22 round draw is as per right (click to expand) based on the above split for 2013. 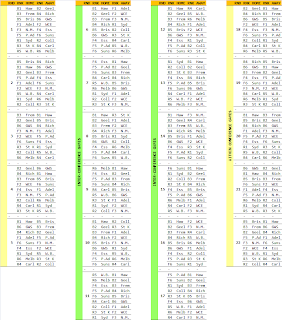 It is an example only so please don't worry if any team has too many or not enough home games, travel etc. That issue can be solved by folk who have more time to work through that issue (and also get paid for it).
The key point if you work through it is that each team plays inside its conference twice and outside once.

Further, if AFL HQ wish to move about the games to fit particular days of the year, that can be done as well.
Given the Anzac Day 'tradition', and the desire of clubs to play a particular team on the opening round (...etc, etc), it is easily adaptable for those games to get shuffled about.
Equally, we have bookmarked the inter-conference games in the middle of the season, with intra-conference games either side for reasons of simplicity. Again, it is at the AFL's discretion to determine when and where games are played.

END OF REGULAR SEASON
It is worth remembering that the conferences above will change year on year, so the mix of teams in conferences, as well as opportunity for blockbusters will alter year on year.
So while some teams wont get the big matches some years, the wheel will turn to produce those chances in later seasons.

We will cover how the Finalists are selected in our next post.
A later post will then cover how the Draft and these conferences work together, and also the mechanics to the season-on-season changes to the conferences.


CLOSING COMMENT
At the end of the day, under our system, the power of the scheduling and allocation of games is partly held by the AFL, but are mostly divested as the ladder from the previous season sets the conferences and the number of games to be played.

If the AFL and the clubs themselves are thinking of what is best for football, y will also need to divest themselves of self-interest as well to fully embrace this concept.