Over on this post after the completion of the finals, we listed Hawthorn as the number one team at the end of season 2013.
And while the theory of our rankings is that at any time of the season we can call a team the number one ranked team, the end of the season is a convenient point in which to count all the best teams over the decades.

So while this is counter the reason we rank teams this way, the table below shows just who finished on top of the rankings after each VFL/AFL season. 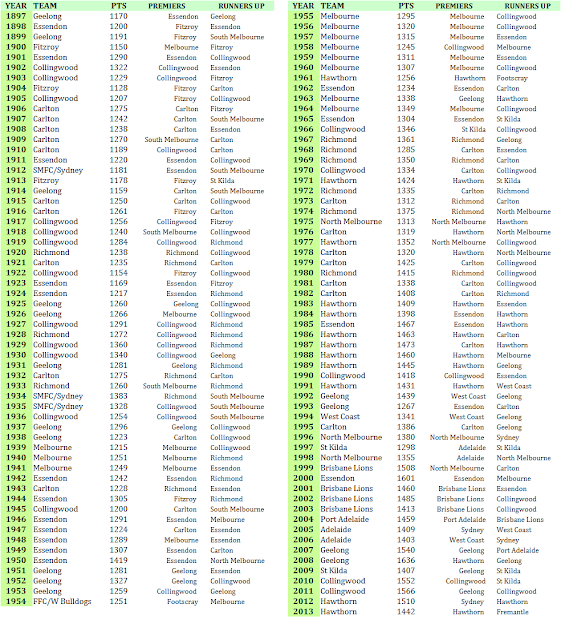 Next to each of the best teams at the end of the year is listed its ranking points at that time, and also the Premiers and Runners up of that year.
Interesting is that in most cases (just under 60% of the time), we team we ranked as the best was also that years Premier team.

In a few cases (just under 20% of the time) the team we ranked as best was not a Grand Finalist in that season. The most recent example was in 2006, when we ranked Adelaide as the seasons best team, but they did not play-off in the Grand Final, having been defeated in the Preliminary Final be eventual Premiers West Coast.

Creating the above table shows some minor correlation between the best ranked team and the real prize. But it is a very big and busy table. What we need to do is boil it down to a total over the whole period of VFL/AFL football history. 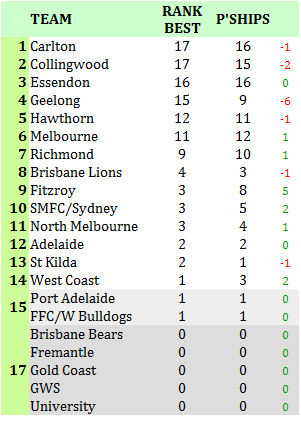 The table at right does just that, and from this we can see Carlton and Collingwood both have finished 17 seasons each as the best ranked team, with Essendon, Geelong, Hawthorn and Melbourne following them.

...And for the sake of splitting the teams, the table was sorted by our rankings totals first, then by total number of premierships.

So while the Carlton, Collingwood and Esendon fans discuss amongst themselves about who is better, lets look at a few anomalies in the table.

3) In their short history, the Eagles have three flags, but we only have considered them the best team of the year once (in 1994, when they won their 2nd premiership)

4) Every team to win a premiership has at some stage finished top of the table at the end of a season. We wonder if Fremantle will alter the list above next year to be either;
a) 'best at years end' team without a premiership, or
b) win a premiership without being the best, or
c) will they get the double?

6) Counter to that, Footscray (FFC/W Bulldogs) were the best team the year they did win.

7) The longest streak is held by Melbourne, with 6 seasons finishing as the best team of the year, from 1955 to 1960 (and netting them also 5 premierships along the way)