All instances of the FootyMaths Institute in other media, on the one page.

As per last year, the spreadsheet for the full list of all drafted players was updated and uploaded to the blog for sharing to the wider footballing diaspora.

This blog post was also picked up by Liam Mannix at Fairfax and got a wee little run on their live blog, as per the image below, with full page link as here in Liam's tweet. 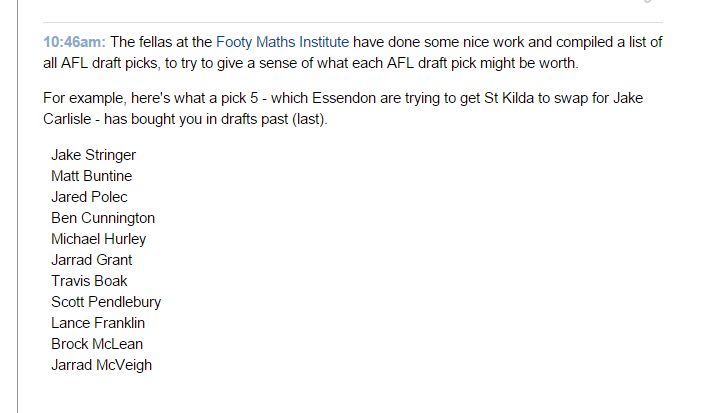 Following on from being asked by the Grauniad to tip the Grand Final winner, the off season has again presented another chance for a walk down 'Media Street'.

So of course the response was "flattered, but no thanks".

Which 2 minutes later turned into a"Yeah, why not. Of course. It would be fun!"

So inserted below is the audio link to that episode. Feel free to have a listen and comment accordingly.

This was originally its own blog post back just before the 2014 Grand Final, as we were asked for our Grand Final tip by The Guardian.

Sometimes during the week we received unsolicited e-mail. Normally skeptisism creeps in and it gets junked.

On rare occasions it's someone interested in the blog in a real sense.
We have had a few inquiries from gambling businesses, and these get the due consideration required.
But more often than not it is junk.

This week it was a very different e-mail that landed on the virtual desktop of the Institute.
It was a request from Nick Evershed of The Guardian to be included in a piece on statistical modelling and tipping of AFL football, as a lead-in peice to the AFL Grand Final.

So, once the initial shock settled, we submitted our answers (on the back of a postcard, addressed to PO Box 999 in your Capital City, as always), and wondered what would become of it.

And so, yesterday (26 Sep) we find the first breach of the nickel and dime, and incredibly part-time, FootyMaths Institute into the mainstream press.

For posterity (and without permission, but attribution), below is our section of a bigger article on statistical tipping of football.

Read it all here:


and our bit is extracted as below.

Prediction: Hawthorn win by one point

Model accuracy: “Over 70% return on tips”

The FootyMaths predictions are determined through a modified Elo ratings system. They are modified by a few factors, but in effect I try to keep the system as simple as possible.
It is purely based on score results, with the application of a home ground advantage bias, dependent on certain conditions (ie not applied to derbies/local matches, or teams using other venues for limited games). Injuries, weather and ‘umpire bias’ are not considered as they could bring subjectivity into the system.

It is a relatively simple system. The rankings points indicate a team’s strength, and we determine an outcome of a match based on them. If a team performs better than predicted, they get a points increase. Fail to meet expectations, and they get a points decrease.

In this finals series, the best two ranked teams are in the grand final. Port Adelaide proved the surprise, reaching as far as they did... perhaps indicating too long of a lag in my change factors.

In terms of success, I look to a few measures as (for want of a better phrase) KPIs.
The first is the percentage of correct tipping over the season.
It has not been easy to maintain over a 70% return on tips, with a ‘best season’ return of 82.1% correct in both 1934 and 1966 (when retro applying the model).
In the modern era (post 1997 and Fitzroy’s demise, when the AFL took the stand to guarantee club financial stability), breaking 70% has been much harder. It has been a period of unparalleled equality in the AFL/VFL’s history. We have only got over 70% again with the introduction of the Suns and GWS.

As I not only tip winners, but also game margins, the more critical numbers are the MAPE of the margin tips (Mean Absolute Points Error) which is effectively the ‘distance from the pin’ of our predicted margin to the actual margin. I am tracking as 30.0 now, which is a reasonable number. Under 30 is considered good (so I have been told!).

For me, it all started out as a bit of fun and a hobby idea. I entered the blog business without even considering if anyone else did such a thing, or would be interested in reading it.
I was a regular reader of Russell Degnan’s idlesummers blog where he ranks all international cricket teams. Russell was the inspiration and provided a lot of the model basics. Without Russell, FootyMaths wouldn’t exist.

As to the grand final tip, it is one of the closest games of the year for us. Only 0.6 points separate the teams, which when converted to a match day score says it will be a one-point win to Hawthorn. But I was similarly wrong about Hawthorn in 2012, tipping them by 12, and the Swans won by 10.

For my dad’s sake, I hope the model is wrong again.

Three other bits we had co-published with the good folk of AustralianFootball.com. Thanks to Andrew Gigacz for encouragement and the opportunity to add to that great multi-league Australian football site.
Click on those links (in the article title) to read them at the Australian Football site.

"With 44 games now under their belt, Footy Maths Institute compares the Giants' early days with those of previous expansion teams.

"An off-the-cuff 'tweet' led The FootyMaths Institute and his mates to search for a trio of linked VFL/AFL players whose careers spanned six decades. Find out how they went."

"FootyMaths Institute takes a look at the record of clubs while under the tenure of recently departed Melbourne CEO, Cameron Schwab."