FootyMaths… even though we all know it never quite works as you expect, come match day, in the back of your mind, you do the calculations and wish for the best.

...But it never seems to work out that way.


So I have created this blog in an attempt at regularly picking AFL winners, and building FootyMaths into a serious scholarly branch of mathematics. The Nobel Peace Prize for Mathematics may not exist yet, but mark my words… FootyMaths cant be ignored by those Scandinavian haddock-munchers much longer now this blog is up and running!

The mathematics behind the rankings and the tipping is the wonderful Idle Summers Blog, which primarily tracks all types of cricket (mainly) scores, tournaments etc. This great blog comments and reports on the tests, one day and T20 matches, as well as creates a cricket ranking system.

And with much thanks to Russ from Idle Summers (for whom I will be always grateful), I have applied his scoring and ranking model into the world of the AFL. Every VFL and AFL match score as been entered into an excel spreadsheet, and have a complete ranking of every team at any point in the past 115 season exists under this model.

(For more information on the nuts and bolts of the scoring system, this page describes the machinations.)
From the start though, it is worth pointing out that the GWS will start with a rating of 1000 (as all teams in this system have), so predictions of GWS wins (laughable as that sounds) will be first season mathematical errors.

So to kick-off the blog, and the 'summer season' of infrequent posts before the real action starts in March 2012, here are each teams first season in the VFL / AFL. 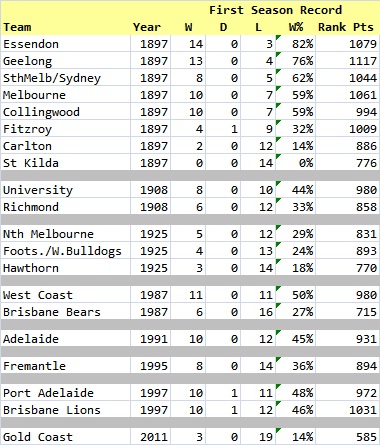