Following on from the original post here about the blog itself and ranking of teams, the godfather of #FootyMaths*, Russ, posed a question on the recently released 2012 season fixture. (Question basically was: who has the best draw, if you look at the teams and their rank).

Before we explore that, I should add to these pages the ranking points and how they stand after the 2011 season.


At the 2011 season kick-off
Using the full list of all games played from 1897 onward, the teams rankings coming into season 2011 are listed as at right. From this, a few key points should be highlighted. 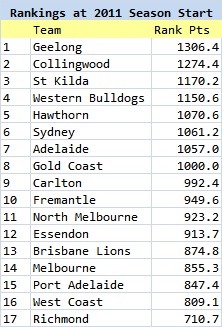 1- Gold Coast are ranked 8th on 1000 points. They were obviously not the 8th best team, and the 1000 ranking points are a nominal figure that every team is allocated upon entering the competition. This will happen with the GWS entry in 2012, as they will also be allocated 1000 entry points.

2- Geelong held to top ranked position even though Collingwood won the flag. The Pies did increase their ranking during 2010, but not enough to overtake the Cats.

3- Similarly, the Eagles were not the bottom ranked team. The ranking mathematics takes a longer view than a single season, so Richmond's longer lower performing record has them anchored at the bottom of the ranking table.

4- There will be other discrepancies against the 2010 ladder, but as before, the ranking is a longer term look at teams performance relative to each other, and in effect provide smoothing of performance ratings over any time period. 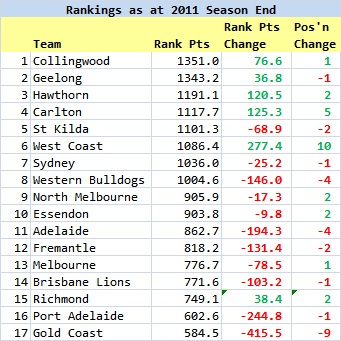 2011 also saw the form turn around of West Coast, as they boosted their ranking points by 277.4 over the season, lifting them from 16th to 6th.
Strong gains were also seen at Carlton and Hawthorn.

Big ranking losers for the year (Gold Coast aside) were both Adelaide teams, Western Bulldogs and Fremantle.

Also of note was that Essendon's season of promise yielded them a (perhaps undeserved) final 8 position, yet their rank points slipped. But it would be remiss of me not to mention that their end of home-and away-season rank was 914.7 points, which (excluding the finals loss to Carlton) gave them a 2010 to 2011 increase of 1 point.


* as opposed to Tony T (@AfterGrogBlog), who it should be noted is known as Mr.#FootyMaths.
Posted by TKYC at 14:53