So this is it.. the season of big pronouncements. Of finally 'balancing the draw'. Of even-ing out the competition, to redress the balance.

... Well, not really. But at least Young Gill concedes:


"that the league couldn't aim for "complete equity" in the fixture, but said the draw had been "well received by broadcasters and clubs." "FoxSports.com.au - Oct 28 2011

This blog will instead use its own measures (and the mysterious mathematics that is #FootyMaths) to see if any team has an advantage. The rankings as determined by this blog for each team against others, set out in a rolling and moving continuum will the the key indicator. Using the rankings and the draw (as per here PDF), a determination of who has the best draw can be made.


#FootyMaths Metric 1
The first #FootyMaths logical measure is as simple as...

This equation is quite simple and combines the rankings of a teams opponents, and makes an allowance for teams that may benefit through having a beneficial home draw.
In terms of the home aspect of the draw, a simple determination is made as per here...

Using this, we can generate the table at right and find that; 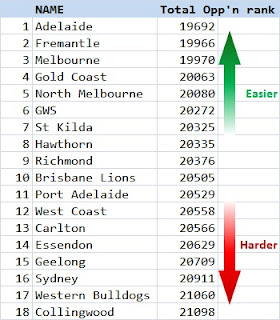 The Tough Draw belongs to Collingwood, the Western Bulldogs, Sydney, Geelong and Essendon.

Notes: Collingwood play the 4 of the top 5 ranked teams twice.

One of the key points from the AFL HQ boffins was to make the stronger teams play each other more and the similarly the weaker also play each other more. This is clear in the notes above, but you could make a case that St. Kilda and Hawthorn have gotten a great result out of the draw.


* Worth noting Hawthorn have quite an incredible home fixture, playing all 8 interstate sides, and only 3 Vic based teams, and one of those (vs. North Melbourne) is in York Park, so it is also considered 'home' in these calculations.
Posted by TKYC at 15:59