Australia... Your Chicken Is Ready!

Perth get the result (and just over the expected margin). The better team of the latter half, and too good for the Stars. Reality check for the Stars, who to be fair, fell into a finals spot.

The run of Hobart is at an end... and my, how the wheels fell off! After winning 4 straight, they leave after winning just 1 of the last 4. Sixers do well away and score the finals gig... can they beat Perth at home.


So the calculated rankings after these games are as here. 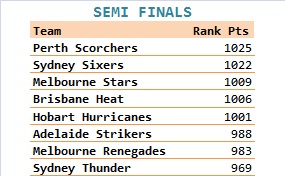 So, Australia... your chicken is ready!
Will it be the Perth Scorchers, or the Sydney Sixers?

The #CricketMaths calculator though says it will be...
Perth by 10 runs.


* (A) Its an entirely contrived artifice of a sport to begin with... nothing sporting at all about a competition constructed and bastardised from one of the grandest games ever founded. It is a product, derived from a need to fill the broadcasters never-ending need for 'content' that in turn is used to promote someone-else's 'brand' and product.
(B) A seven game 'season' only confirms the above. True tests of character and skill come from harder endevours than a mere 7 games. The competition will only ever bee seen as a Mickey Mouse one until that is rectified.
(C) And there goes my chances of getting a job with Cricket Australia... out the window!
Posted by TKYC at 13:34