Just for a laugh, and because work is a bit slow, here is the idlesummers.com ranking system applied to that nonsense that is the "Fried Chicken Outlet" T20 Big Bash League for season 20111-12 (wiki).

Heading into round 5, the best ranked team (as can be expected, as they are undefeated) are Hobart.
The Round 5 predictions are in the table below, and all other results and predictions are also posted below in reverse round order.  The italics text next to the team name is the ranking points of that tteam leading into the match. 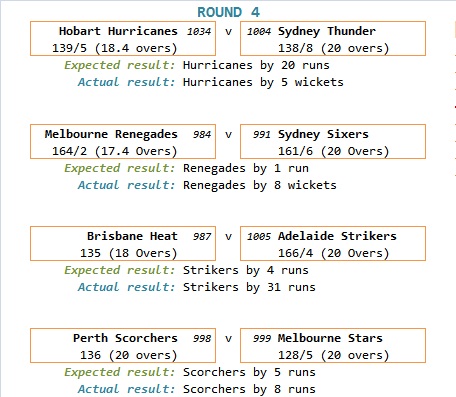 All games go according to the form predictor as the teams settle into the season. Renegades continue to find winning form, but Hobart are almost unassailable (verging on invincible) at the top, undefeated.
Brisbane remain rooted at the foot of the table.


The big movers after this round were:
+ve change
+8: Adelaide, with a bigger than expected win.
-ve change
-11: Brisbane, another bad home loss.
-7: Sixers, losing by more than expected.
-3: Hobart, dropped 3 points for not winning to a level expected. 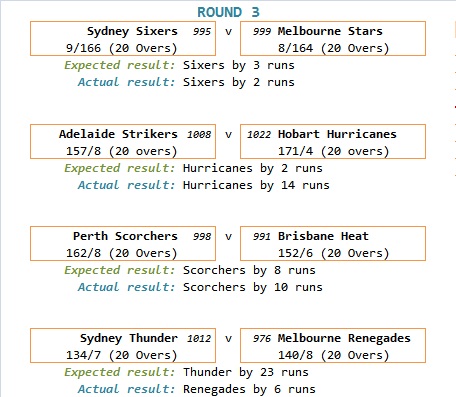 All games bar one run according to the form predictor. The odd one out is the first win by the Renegades, away against the Thunder.

The big movers after this round were:
+ve change
+12: Hobart, again with a bigger than predicted win, this time away.
+8: Renegades, from a solid away win against a much better opponent.
-ve change
-8: Thunder, losing at home to a much lower ranked Renegades. 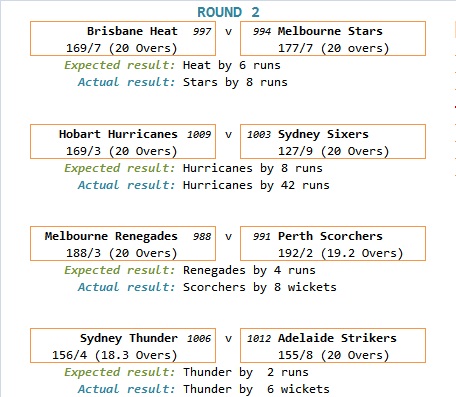 Of the two games involving both winning teams, the results go the way of expectation.
In the other two games (1st round losers head-to-head), Brisbane and the Renegades with the home fixtures both get the tip to win, but fail.

The big movers after this round were:
+ve change
+13: Hobart, with the bigger than predicted win at home.
+7: Perth, from a solid away win.
-ve change 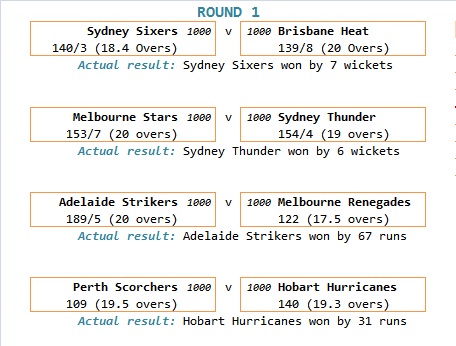 Games played as right with ranking points in italics team name... of course, new teams for this competition, so each is set at 1000 for this round.

Worth noting with the ranking points system that at this stage (all teams on 1000) that there is no expectation of advantage, other than a home ground advantage. So the ranking points table below highlights the teams winning 'away' (Hobart, Thunder) received better points boosts than the Sixers.


The big movers after this round were:
+ve change
+12: Adelaide with the big home away.
+9:  Hobart winning away.
-ve change

-12: Renegades with a big collapse.
-9:  Perth after losing at home


Results after these games as here.