The last of the Super Variety Bucket *


The final preliminary round (the bottom of the bucket, so to speak) of  the "Fried Chicken Outlet" T20 Big Bash League for season 20111-12 (wiki).
And, heading into the last hurrah, we can see that, basically
...any team can still make the final 4...
proving once again that this competition is to cricket what the sponsors product is to a healthy diet.

Yes indeed, if the Stars lose against Adelaide, and any of the other teams outside the top 4 win by a big enough margin, they are a chance to make the top 4.

So, to the predictions...


The big movers after this round were: 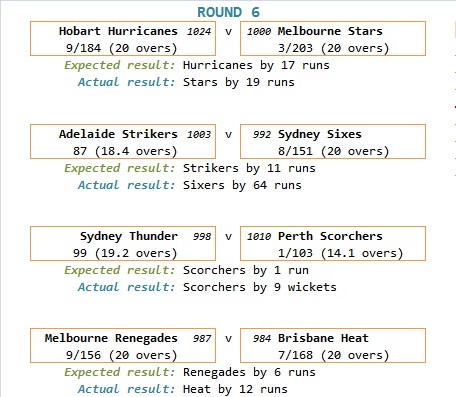 +13: Sixers, with a huge and humiliating defeat of Adelaide
+11: Perth, after cruising to an easy win over the Thunder. Now they sit a-top both tables as the new league leaders
+10: Stars, upsetting the leaders Hobart and dumping them back to second. Stars also lift into the top 4.
-ve change
-15: Adelaide, smashed by the Sixers
-10: Thunder, struck by the Scorchers.
-9:  Hobart, who were flying mid season but have now lost 2 in a row.

* the Super Variety Bucket is what the fried chicken mob call a meal. Used without permission, so if your not happy, tell me and I'll change it.
Posted by TKYC at 16:39