The latest update to the nonsense that is the "Fried Chicken Outlet" T20 Big Bash League for season 20111-12 (wiki). And what nonsense it is that allows 5 overs to be called an innings, 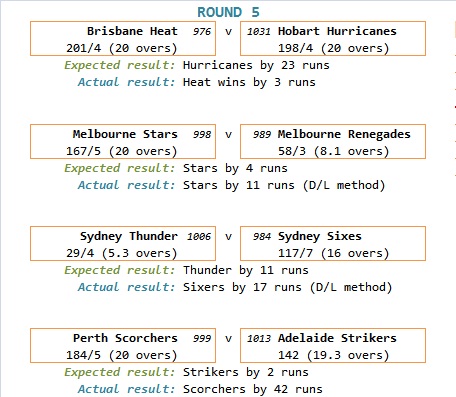 Brisbane win their first, and beat the top ranked Hobart (of all teams... and yes just after I dubbed them 'verging on invincible'), in the highest scoring game of the season to date.
Perth also knock over Adelaide by a big margin which should alter both teams ratings in a big way.
The other big winner from the round were the T20 detractors, with 2 games 'rain affected', but both still considered 'matches' with 8.1 and 5.3 overs bowled.


The big movers after this round were:
+ve change
+11: Perth, with a big win against the ranking predictor.
+8: Brisbane, gaining a first win in the upset of the round.
+8: Sixers, winning against form (and with a bit of weather help).
-ve change
-10: Adelaide, the collapse and 42 run loss hits hard.
-8: Thunder, with the rain affected loss... bit tough that! Might have to consider a tweak to the system for Duckworth-Lewis events.
-7: Hobart, dropped 7 points in that loss to Brisbane.