Only the Four Piece Feed remains.


Its finals time for the "Fried Chicken Outlet" T20 Big Bash League for season 20111-12 (wiki).
As before, leading into the final preliminary round any team could have made the finals. But Adelaide did what Adelaide does best, and rolled over. This let the Stars win and secure fourth spot, and also shut the gate on the fast finishing Brisbane.
This sets up the finals to be contested by the four remaining pieces of the sponsors product: Perth, Hobart Melbourne Stars and Sydney Sixers.
The other three teams Adelaide, Melb Renegades and Syd Thunder... well, the less said about them the better.

So, to the predictions...

- Hobart (1008) v Syd Sixers (1013)
Hobart win again after a few losses, but at home should be favourite, even though they are lower on ranking points.
Hobart by 3 runs. 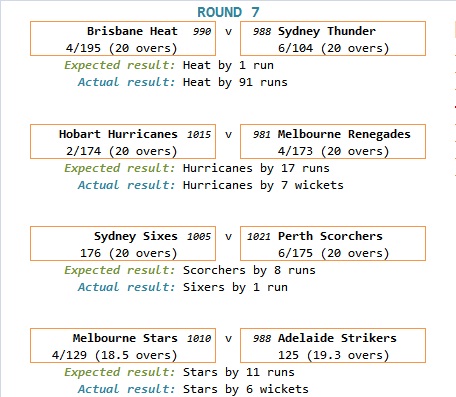 The big movers after this round were:

+ve change
+16: Brisbane, finish strong with a huge and humiliating defeat of Sydney Thunder.
+8: Sixers, defeating the better ranked Perth.
-ve change
-19: Sydney Thunder, smashed by the Brisbane and finish as the lowest raked team of the competition.
-7:  Hobart, who were flying mid season, then lose 2 in a row. Thy still lose points even after defeating the lowly Melbourne Renegades because they won by less than expected margin.

* Noting of course that the table to the left is sorted according to my rules (win% first, then by for/against).
I'm not interested in farting about calculating net run rates and so on.
The actual Big Bash table, according to ESPNCricinfo.com, is different (click here).