And to lead off the footy talk is the good old Melbourne (Murdoch) HeraldSun... Never short of an excuse to run a Collingwood story, never afraid to push an angle to sell papers.
Getting more desperate day-by-day to boost flagging sales of the printed form, and/or drive web-hits and page-views of the digital form.
Should we assume the same about Champion Data? Is it possible that to prove its relevance to the football community it needs to generate content, no matter what? Along with generating a whole mess of stats (relevant or otherwise) over the last decade or so, the Hun story below now shows they are moving to off-field stats, of a sort, to keep pumping up their profile.


Numbers add up to a tough draw for Collingwood
NEW Collingwood coach Nathan Buckley faces the toughest draw in the AFL in
his debut season, according to statistics gurus Champion Data.

An analysis of the home-and-away fixture in the newly released AFL Prospectus,

based on each team's 2012 opponents and their win-loss ratio from last year,
shows Collingwood meets teams that won a collective 243 games last season -
six more than its preliminary final opponent, Hawthorn.

Poor old Wobblers... got the rough end of the stick, they say. That's sure to pull mugs in off the street and into the news-stands to buy the Hun.  Also a credibility boost for Champion Data too, I'm sure. Well, at least in the eyes of some.

Looking deeper, NONE of what is written reflects on the quality of the opposition, strength of the team in relation to the opposition, or the grounds that are playing on during the season. Yes, mention is made of travel during the season, but only in terms of kilometers travelled only... and only Champion Data know how they measured that. Safe to assume the kilometers from the MCG to Docklands are just a drop in the ocean though.

So without access to any Champion Data data, I have re-created their figures, and lo-and-behold... THE PIES HAVE THE TOUGHEST DRAW!!! as the table at right attests... But it is really only an illusion. 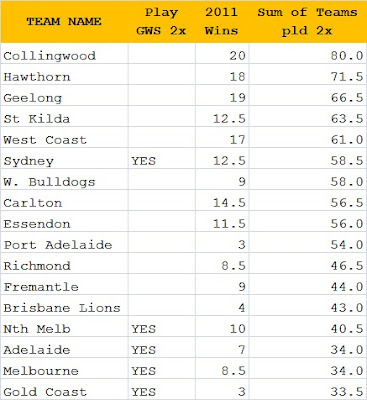 The FootyMaths to arrive at this conclusion is this:
1. All teams play each other ONCE, and 5 other teams twice.

2. Tally up the number of wins the opposition clubs have... Excluding the teams played once (which is the same number for each team, so therefore irrelevant).

3. The sum of games won by opposition teams is then sorted and tabled.

* Worth noting the Hun suggests Melbourne have 'the easiest draw', but in my data, it comes out as the Gold Coast. I may be wrong, or perhaps its not me.

But lets look more critically at this than the Hun sports folk seem incapable of.
First... No surprises to see the four teams with the supposed best draw all play Greater Western Sydney twice... and that contributes ZERO wins in the calculations.
Second... also unsurprising that the teams with the worst draw are... basically last years top 8!
** Noteworthy is that a top 8 team, Ess-er-don, has a better draw than the Western Bulldogs who finished 10th.

This clearly indicates the AFL HQ boffins have worked to handicap the draw... to give higher finishing teams tougher matches, and lower finishing teams a softer draw to boost their chances for finals.
There is your story Hun, right there... "AFL creates a handicapped draw!"
...But that wont sell as many papers as wheeling out the old "Wobblers get robbed, Again!." line though.


One more analysis of this data, if I may...
The above shows better performing teams seem to play each other more, giving the illusion of a tougher draw. But if those teams are supposed to be strong, then it is only reasonable to expect the handicap should try to pit them against each other to level them out?
What if that is missed? 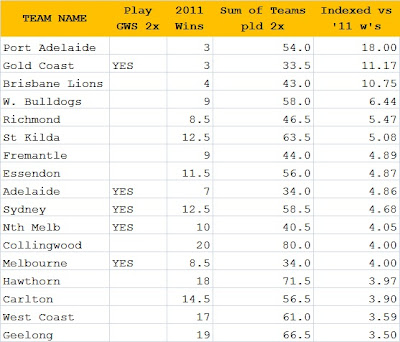 At right here is the same results as above, but indexed.

The FootyMaths here are calculated by dividing the sum of teams played twice into the total number of wins that team achieved in 2011.

This yields a very different table, and puts Port Adelaide, Gold Coast and Brisbane as having the worst draw, by quite a margin

Collingwood are shuffled down the table to the 12th hardest draw *relative to its own performance*.
Which, of course, WONT SELL ANY PAPERS!

I can hear Robbo and the other duffers in Hun HQ now...
"Damn, that handicapping that Vlad and the Trotskyites at the AFL Kremiln
implemented... makes it hard to sell a bloody paper!"

These take a longer view of teams performances than just 2011 to determine a 'draw toughness indicator'. Compared to those pages, the Hun / Champion Data analysis is, well, for chumps!
Posted by TKYC at 11:43