The intellectual powerhouses at Carlton FC that brought you the 2002 Carlton Salary Cap Breach are at it again, but only in smaller, more subdued ways..
This tweet by @Carlton_FC (and re-tweeted by @MCG among others) give great news for fans of this weekends match.

That's right, its an historic occasion as the 2,500th game is played at the MCG.
All congratulations, of course, should go to Yarra Park, not to the competing clubs who not only base themselves away from the MCG, but have also had other 'home grounds' as well.


But back to the tweet, which has the link 'tiny.cc/ge1zcw' which actually then links you on to here

and the Carlton story. I have extracted out the table at the foot of that story to show the FootyMaths fail from Visy Park, as per right. 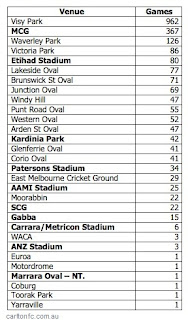 And the subtle logical fail there is that Windy Hill, where the Blues have played 47 times is ranked higher on the table than Punt Road, and the Western (Whitten) Oval.


Carlton... back to school for you!