The wonderful Paula on twitter has again posed an interesting question...

@PJSC84: @AFLFootyMaths another one for you. What is the difference defensively (goals against) and attacking (goals for) for Freo 2012 verse 2011?


As a Saints fan, she is thinking Ross Lyon has set them up a bit more defensively this year than Mark Harvey may have.

So lets look at 2011 and 2012 Fremantle results and try to find any difference.

A prima facie case that they are better defensively, with a small drop off offensively.


We can look in even more detail, as the 5 games that Fremantle have played so far correspond to 2011 fixtures*, as here: 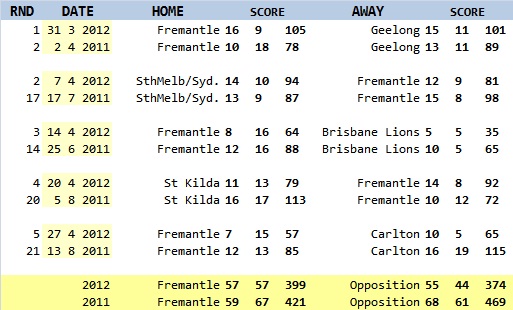 In corresponding 5 games, Freo have scored slightly less (2 goals), but also restricted their opposition to less as well (13 goals).

Which, on the whole appears to show some defensive improvement at Fremantle under Ross Lyon, and further underlines Lyon's defensive coaching strategies.


* And yes of course, you can't compare apples with apples as easily as this... there are playing group, weather, morale and other factors in play that make such base comparisons only slightly more than guesswork.
Posted by The FMI at 16:25