Also known as: 9 days for the round, 9 games, and I bet no one tipped them all right!


So after the first week (or two) of games, the results are in.

The FootyMaths predictor started the round well, picking up the first two wins, and 'near the pin' in terms of margin tipping, but it all went downhill from there.

Individually...
- Not a bad result by the Giants, given most had them losing by about 90pts.
- Carlton, as tipped, once again gave the Tigers their annual season-opening clip-around-the-ears. Margin was pretty much as per form.
- Collingwood and Geelong got done in the first of the upsets, with Geelong the bigger surprise of the two.
- Adelaide righted the form book, easily beating the Gold Coast.
- All other games were a fail on the tip... though the close one of the week was tipped as Nth.Melb by 7pts, and ended as the Dons by 2pts. Both the closest game and the nearest the pin for Footymaths on the margins!

Strongest Gains:
West Coast winning on the road and picking up 13 points.

Hawks also picked up 11pts on Friday night after beating the Pies.

Fremantle also received an 8pt boost by beating the reigning premiers, and Port Adelaide and Brisbane also got another 8 pts.

Biggest Drop:
Gold Coast dropped 16pts after being belted at home, when they were expected to lose by 3 goals.

The other big loser was Collingwood, who shed 14pts on Friday night, and, as per the table, are now not the best ranked team. Melbourne also shared a 14pt drop too.

The Bulldogs also dropped 11pts after a defeat by the Eagles. 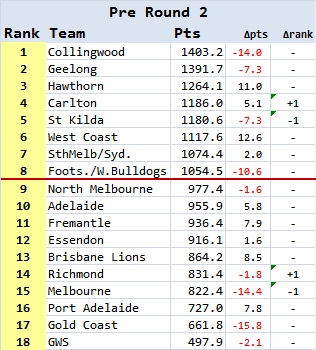 Ladder Leaders:
Collingwood's run as the best rated team is still held by the fine margin of 11pts over Geelong.
Carlton and St Kilda change places in the eight, and Richmond has climbed over Brisbane into 14th.


Note: some data has been altered to reflect the corrections to the database, as mentioned in the 'Erratum' post.