Also known as: Should have known better than to tip the Dogs away at Footy Park

...but such is the way of FootyMaths, as the Dogs to have a better ranking than the Crows, but are on the wane.

So Round 2 sees FootyMaths rise again, just marginally like another literary figure who did the same at a particular phase of the moon. The form and calculations came out with 8 winners of 9 games, but we are sure most tipsters would also have got at least that too.


Second round results are in...

As can be seen, the calculations picked up all the winners. Not a bad effort to, we should say, to pick the Bombers v Power, Swans v Dockers and Cats v Hawks to be pretty close... a couple of good 'near the pins' there.

Strongest Gains:
Biggest gain to West Coast (again), proving once more that they were the BEST team to have won the wooden spoon in living memory. They and Carlton were the only teams to have a double figure increase in ranking points this week, with Hawthorn and Richmond the next best (8pts each).

For the new teams, Gold Coast dropped a further 17pts again (after last rounds losing 21pts), and the GWS also lost 21pts. It was a bad Sunday for them.

The other big loser was Collingwood, who dropped another 14pts on Saturday night, after Richmond put on a steady and unspectacular display of dogged determination and junk football. 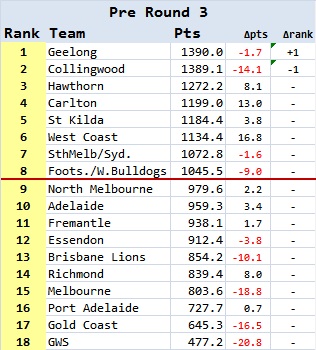 Note: some data has been altered to reflect the corrections to the database, as mentioned in the 'Erratum' post.