Also known as: We tipped all the other winners, but not the Blues and the Roos

In fact we tipped it so well as to have got our first pick ON THE MONEY!
A big thanks to the Dons, who either sandbagged for 3 quarters or were simply outplayed by the Suns kiddies. Their 17 pt win was as tipped by the FootyMaths, as here...

Of course, the big news all weekend (and into this week) is the defeat of Collingwood by Carlton, and talk of the crumbling of Empire. While the FootyMaths  Institute did not tip a Carlton win, we did mark the preamble to the game with this post on how Collingwood are on the slide (and added too with this post). Carlton were the big ranking winners of the week, Collingwood the second biggest ranking loser.

In fact, the Collingwood dust-up has almost hidden the other big upset of the week, North doing over Geelong... which could have been a bigger upset too, if the Cats didn't get into gear near the end.
North picked up a big boost, and are now 40 points from breaking into the top 8. Another non-tip by us.

We did get all 7 other games correct, with the Sydney game also very close to being spot on. Better luck next time.

Strongest Gains:
Carlton picked up 18pts for the defeat of the Pies, and North Melbourne also collected 11pts after beating the Cats (as above).

Richmond gained 13pts and rose another spot on the ranking table after a big win against Melbourne. The Dees are fast going down the gurgler, under 800pts for the first time since Apr 2010.

West Coast continue to power ahead, but nothing unexpected after a running the Giants into the ground.

The new boys GWS and Gold Coast also continue to shed points, though it remains unclear why the Suns dropped 11pts after making the expected margin. The boffins continue investigations on that. 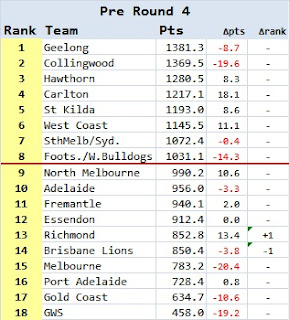 Finally, the Western Bulldogs are also spiralling down, and lost a further 14pts this week.


Table Changes:
Only change of significance was Richmond rising 2 spots to 13th, and closing in on Essendon.

Elsewhere, Carlton cross into 1200pts for the first time at that level since Apr 2002. And as before, North are closing in on 8th, as they improve and the Bulldogs disintegrate.