Round 4: Degrees of Sanity

Also known as: ...well, mostly the teams that should have won, did.

Another three day weekend of footy in the bag and not too many an upset in the books...

OK, OK! So we didn't tip Freo, the Eagles or the Dons the win, but both the Dockers and West Coast are on the improve, week-on-week, so cut us some slack. And the Same-Olds getting up for the win... well, even they didn't think it possible! (Noted a lack of pre-match tweeting last week by 'them').

Nearest the pin this week... The bulldogs over the Dees, missed by 4 points.

Collingwood may have 'righted the ship' by winning a game, but when expected to thump Port and only winning by 4 goals... well we at the FootyMaths Institute can only re-iterate that Collingwood are on the slide.

Strongest Gains:
Richmond gained another 15pts to be the biggest gainer of the week (and only one of two teams to click over a double figure increase) on the back of the noble loss to Geelong... not that noble losses count for much towards a Premiership.

West Coast also pulled in a 10pt increase as they continue to power ahead.

The other truly notable increase... the GWS Giants picked up 4 points! Not 4 premiership points, but 4 ranking points... and not via a win, but by losing by less than expected v Adelaide. Well done kiddies!

Biggest Drop:
That 'bang' that was heard over Melbourne this week was the sound of yet another Collingwood bubble bursting, following this weeks drop of 19pts. Sure, they defeated Port, but really, they were only in 2nd gear.
Which brings Collingwood to a combined drop of 103pts since Round 23 2011.
Off. The. Boil! 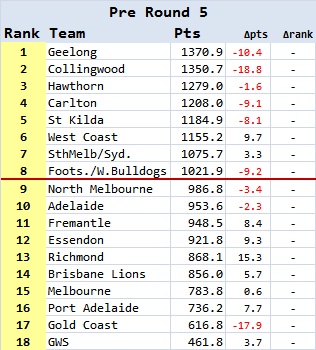 Gold Coast continue to heavily rid themselves of ranking points, another 18 gone this weekend. Expect the newer teams to bounce about this year, as the data is unsettled for them.

Geelong also lost 10pts after their struggle to overcome Richmond.

Near double figure loses to Carlton, St Kilda, and the Western Bulldogs

Top 5 teams all lost points and come closer to the rest of the field.