Round 5: An Honourable Loss Is Good?

Also known as: ...all our calls were slightly over.

Yes, we have tipped teams to win by more than they actually did on 8 of the 9 games of the weekend (with the exception the Hawthorn tip, which we were wrong about... but that's a good thing!).
Sydney's win highlighted them as the only top 8 team to increase ranking points this week. While others may have won matches, they did not perform as expected so lost points.

Nearest the pin this week... Well, we went VERY CLOSE on
- West Coast, missing by 9pts,
- Carlton and North Melbourne, both missed by 8pts,
- The Western Bulldogs, missing by 5pts,
- Geelong, missing by 4pts,

...but this weeks nearest the pin...
- Adelaide over Port Adelade, missed the correct margin tip by 3 points.

All of which makes this the most accurate round on margins this season.

Collingwood again garner a win, but the 1 point margin sees them slipping again... and we will re-iterate that Collingwood are on the slide... more analysis to come on this later!


No games in the Blow-out Bin this week, which is the first week without a +60pt game this year.

Strongest Gains:
Both Sydney and Richmond gained 11pts this week, showing again that winning form is good form, and that honourable looses don't count in the bigger scheme of the competition, but they do help the rankings!

Essendon also gained 10pts after running Collingwood to within a point.

The other truly notable increases were also that the bottom 8 ranked teams all picked up points... GWS, Gold Coast, Melbourne... all of them!

Biggest Drop:
Another 'bang' that was heard over Melbourne mid last week was the sound of yet another Collingwood bubble bursting, following this weeks drop of 19pts.
Which brings Collingwood to a combined drop of 122pts since Round 23 2011.
The AFL's Biggest Loser, 2012!

Hawthorn dropping 10 ranking points is also the first big loss for them since August 2010. 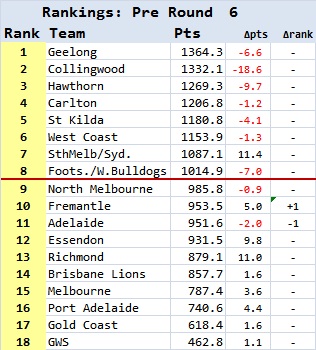 Honourable losses do count for something here at the FootyMaths Institute!

Fremantle's big, but short of the mark, effort v Carlton and Adelaide not putting away Port sufficiently means that Freo climb up to 10th.
And with only 2 points separating them, there could be more changes ahead.

Also, nine of the top ten teams all lost points to come closer to the rest of the field. The bottom 8 teams also all gained points.