The Collingwood faithful love their team and would be bitterly disappointed to have lost to Geelong in the Grand Final of 2011. They shouldn't really have been surprised though, as the only team to beat the 2010 Premiers all of last year was Geelong...

And the round 24 match was quite significant;   at the time, during the grand final build up, and still today. There was a lot of talk at the time that it was a 'dead rubber' match and the outcome 'meant little'. But surely to professional athletes who are driven by success, a loss (any loss) is either demoralising or a driver to improve.

The response from that big loss by Collingwood has been less than inspiring when you look at both the raw results and the FootyMaths data.

2- The FootyMaths ranking data has them conceding top ranking to Geelong last week (as per here).

3- They have lost ranking points for the last 6 consecutive matches, as per the table below (I have added in the round 23 match v Fremantle to the table, as it was Collingwood's peak rating score).

Charting that trend should also be alarming for the would-be 2012 premiers, as here. 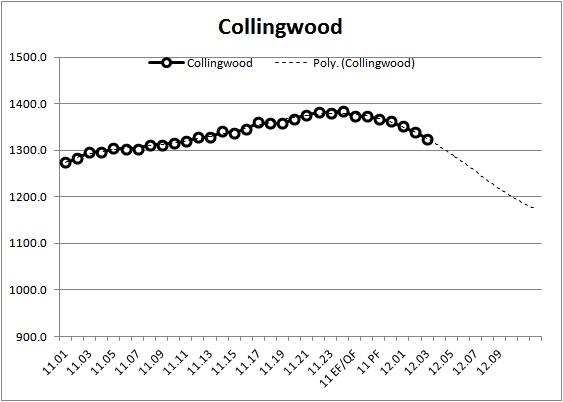 Of last years finalists, they are the only team to be trending down.
- Geelong, St Kilda, Sydney and Essendon are holding stable.
- West Coast, Hawthorn and Carlton are all improving.

Compare the above chart to the one below, all of Collingwood's nearest competitors... 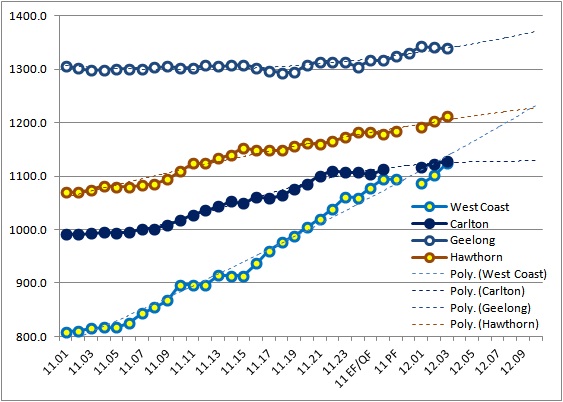 If the trend charted were to continue, Collingwood would be ranked below Geelong, Hawthorn, West Coast and (possibly) Carlton.

The next 3 weeks may define their true position better...
- Firstly at the M.C.G. v Carlton, who are on the rise.
- Later, at Docklands v Port Adelaide and the M.C.G. v Essendon... both matches they should not only win, but also win comfortably.
Posted by The FMI at 09:46