...if you consider a tradition to be a confected, media driven match with a life span of 17 years.

The Institute has not only already placed its extremities on the block and tipped this years Anzac Day match result, but also was amused by the collected tweets by @AFLStatsGuys* this morning, as here. 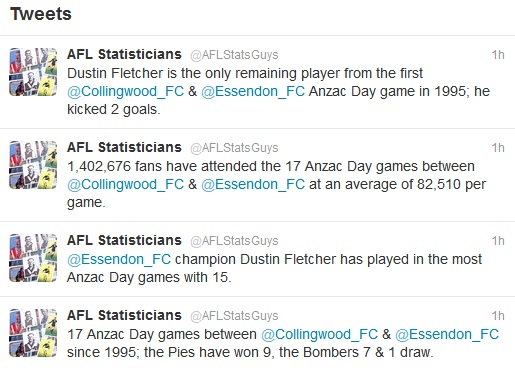 So lets also look further at the glittering occasion this game is, and how the teams were travelling going into the game by using two metrics:


The first metric is to use the FootyMaths Institutes own ranking data to compare both teams. 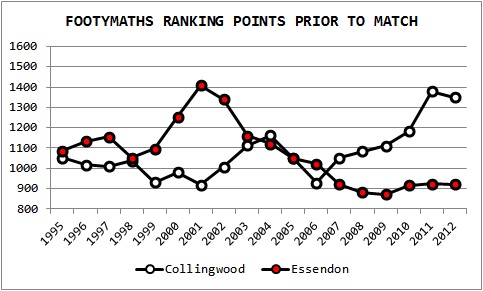 
The second metric is the ladder position from the previous year **.


As the AFL award this game every year and defines it with a 'blockbuster' tag, is pertinent to note that since inception, it has been played.
- By one team outside the top eight on 13 occasion (out of 17).

- There has only been one occasion where both teams were both inside the top 5 the previous year (2003).

- There has been eleven occasions where one of the teams finished 12th or lower (i.e. in the bottom 4).

- The 2006 Anzac Day match was contested between the previous seasons' 13th and 15th placed teams.

Such a beautiful set of figures that guarantees this game 'blockbuster immortality'.

Must make all involved so proud.


LATE UPDATE
The @AFLStatsGuys have kindly reminded all and sundry the below:

...which means there is more tradition in an Anzac Day game NOT involving Collingwood and Essendon than there is in games that do involve them...


FOR THE RECORD
Below is the full list of every VFL / AFL game played on 25 April. Note well that games played on 25 Apr 1914 were the year immediately before the first Anzac Day action in 1915, and before the outbreak of World War I.


Reading through the list, the 'great tradition' of Collingwood v Essendon on Anzac Day NEVER OCCURRED until 1995.

* @AFLStatsGuys bio says: "Official AFL Statisticians Cam Sinclair and Col Hutchinson   Australia · http://afl.com.au" ...so lets assume they are AFL employees, and as impartial as that allows.

** An argument could be made to use the previous weeks ladder position, but given that the Anzac Day game is played early in the season, the validity of the data is questionable (i.e. only a small number of games played renders the ladder positions meaningless).
Posted by The FMI at 10:59