We at the FootyMaths Institute have blogged before about some teams are losing points, and also others improving.
What we should also note is some teams that are having a dream run, week-on-week. And while our rankings do not mean much when it comes to ladder position, we feel they do show the form and performance of a team.

Looking at teams that are actually performing well (though may not be winning each week) we can see that as of the end of round 7, three teams have had very positive seasons.

Essendon, Fremantle and Richmond have all had 6 weeks (of 7) where there ranking points increased. No other teams this season have as good a record.

And while weren't planning to document anything in particular about the 'DreamTime at the G' game this weekend, it guarantees that one of Essendon and Richmond will have another week where rank points are lost. (Fremantle also play away to Hawthorn, so they may also drop points as well.

For the record, here are the three teams records for 2012. 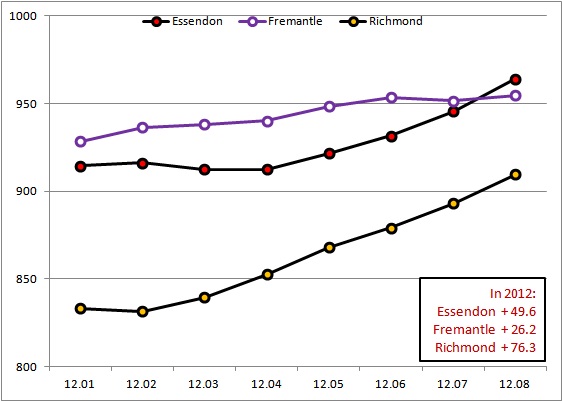 Richmond have the greatest gain for the season, and after defeating Sydney they break through the 900pt barrier for the first time since August 2009.

Fremantle and Essendon both sit with rankings over 950pts. Both teams had been bouncing around that level during 2011.
Posted by The FMI at 09:00