Gorillas in our midst?

There was plenty of disenfranchised Melbourne supporters over the weekend after another 100+ point loss this week (on top of an earlier one in round 2). This season has lurched from one disaster to another from since before the season even began.


(For a deeper look inside the life of a Melbourne fan, please read "Every Day Is Like Sunday", by @Demonblog ... tragedy, comedy, descriptions of football life on the edge)

Of the tweets about the Sydney v Melbourne game that came through our tweet-stream, these below were  interesting, via 'Mr. FootyMaths', Tony Tea:


@AfterGrogBlog: Excluding GWS & GC (just) this Melbourne side is the worst AFL side since Fitzroy in 1996. #aflswansdees

So with those comments in mind, lets run a few numbers on 1996 Fitzroy and 2012 Melbourne.
Note: Language warning... it will get a tad fruity later

To start, lets look at the final 2 seasons from Fitzroy (full data at the foot of the post) and compare that to the last 44 games from Melbourne (in the table at left) and then also zoom in and focus on the last 22 games as well (table at right). 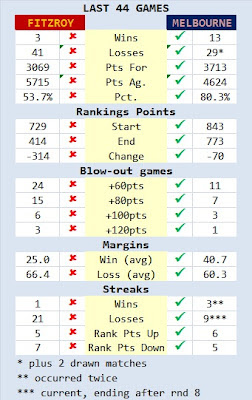 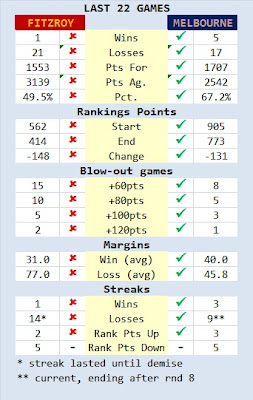 Looking at the both sets of game data, you our assessment is that Melbourne are not headed into the same abyss as Fitzroy.

What is interesting though (and worrying for Dees fans) is that the last 22 games data has some similarities and differences to the Roy-boys last season.

Differences: Melbourne have clearly won more games, scored more and conceded less. According to our rankings as well, they have a higher base, and have maintained that... no basket case for the red and blue as yet!

Similarities: Starting with our ranking points, while Melbourne are ranked higher, the drop off in points is very close to the same drop off that Fitzroy went through in 1996 (FL: -148, MD:-131). Melbourne are also on an ongoing 9 game losing streak, and may equal or surpass Fitzroy's last 14 losses of 1996.

And Also: Further, examining 'blow-out' margins provides insight into Melbourne's playing stocks, and perhaps mental toughness. All of the truly large blowouts (+100 and +120 point results) have come in the last 22 games.

Also the last 22 games have also had three quarters of the +60 and +80 point blow-outs results for the past 44 games. The concentration of these poor performances must have the coaches and fans worried.


Looking at the ranking points system we apply here at the FootyMaths Institute to both teams for the last 44 games, we can chart performance as here (with annotations). 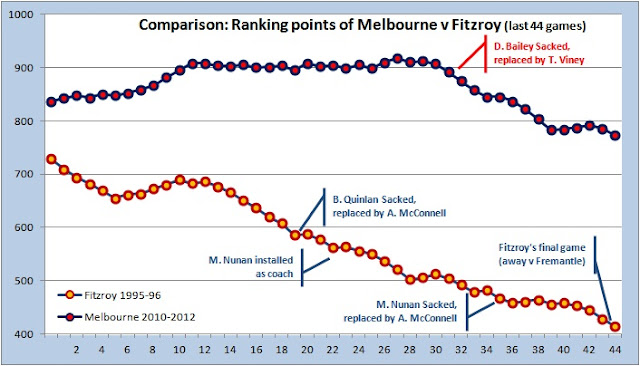 This chart also highlights that when Melbourne are working well, they can be a competitive unit... but the drop off in rank since the last weeks of the Bailey era is alarming.

But, again, our position is that Melbourne are not a 2012 version of Fitzroy.


Final Points
1- Fitzroy fans, do not despair... we will look back into the archives and one day note some happier days in the lives of the Brunswick Street faithful... keep watching this space!

2- After much of the weeks news has revolved around some sort of confected 'Melbourne Crisis' (you know, the media beast needs to be fed), I am loath to add more fuel to the fire. This post was inspired on match day by the a fore-mentioned tweet, and is intended purely for comparative purposes.

And while writing this, I stumbled across another tweet from Mr FootyMaths (plus replies) that I thought best sums up the collective Demons frustrations. 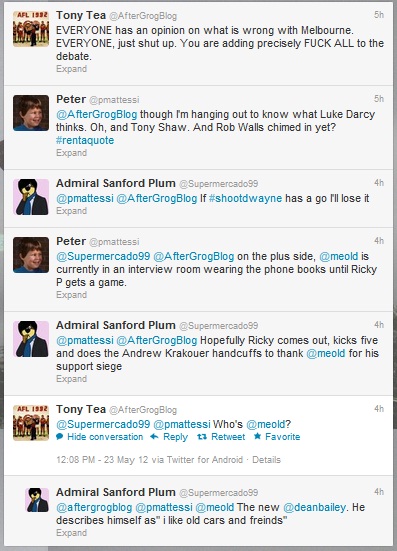 So please consider this post as just one more assessment that adds "precisely fuck all to the debate". 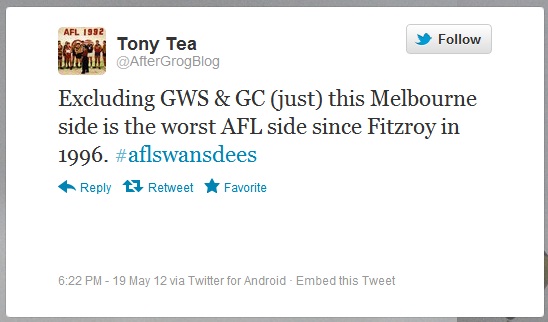