How Cold are the Pies?

The FootyMaths Institute has been noting after every week that, using the FootyMaths calculations, Collingwood are on the decline (here 'Slide By Slide In 2012' and here 'Slide by Slide: Buckhouse Redux').


So we are taking the opportunity after 5 rounds to explore who are the current winners and losers, and those not making any movement at all. 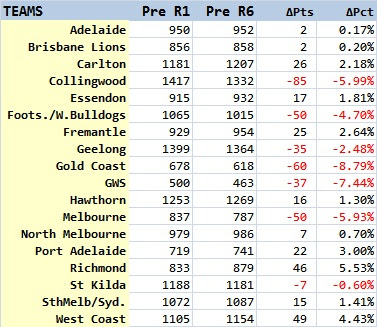 The table at right shows the ranking points changes to each team since the start of 2012.

There has been little change at Adelaide, Brisbane, North Melbourne and St. Kilda this season.

The biggest improvers in 2012 are West Coast and Richmond, and to a smaller extent:
Carlton, Fremantle, Port Adelaide, Essendon, Hawthorn and Sydney.

The clubs that are seeing there ranking points drop off dramatically are Collingwood, Gold Coast Western Bulldogs and Melbourne, and to a lesser extent:
the GWS and Geelong.

Charting this data produces the following: 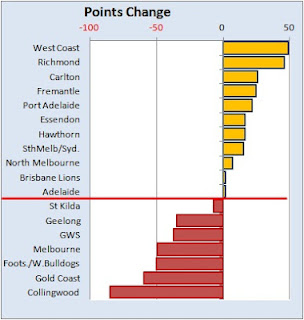 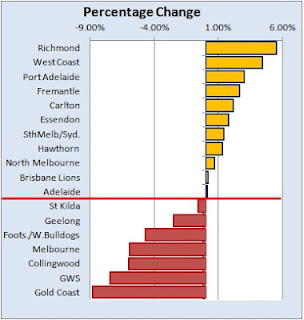 Which shows that Richmond and West Coast have improved the most in either points or percentage terms, with West Coast picking up the most points overall, but because Richmond have a lower base, their percentage increase is greater.

At the foot of the table, Collingwood are clearly losing the most raw points, but coming from such a high base, they are only ranked 3rd last in percentage terms.
We would expect the GWS to be at the bottom of the spectrum too, but it is concerning that the Gold Coast is also losing points. With one season under the belt, we expected them to hold rankings, if not improve. To have lost the second largest amount of ranking points is concerning. 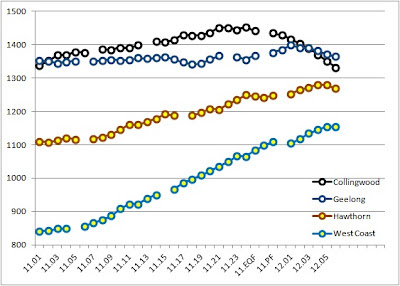 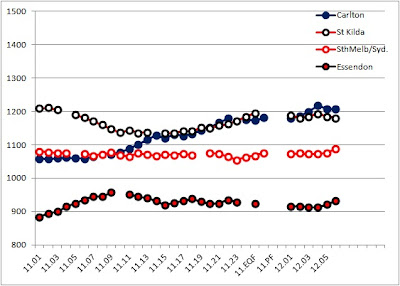 But back to Collingwood...

The two charts left plot the ranking points of the top 8 teams from 2011 (by ladder position at end of home and way season).

They have been separated into top four and bottom four so as to unclutter the charts (8 lines on a chart is too busy!).

What can be seen from this is that Collingwood are clearly the only team from last years finalists to be losing ranking points, and by extension, under-performing.

Their contemporaries though, are:

The Pies are indeed cold down at the Bank (formerly expensive Japanese Car) Centre, and 'The Buckley Transfer' is not having much of an effect.
Posted by The FMI at 12:00