With the Grand Final Replay Geelong v Collingwood coming this week, its a good opportunity to review the teams... but not as a preview to the clash, but a comparison of the teams past.

This was inspired by a new reader and twitter follower John (@Magpies59Fan), who was interested in our rankings points determinations and how Collingwood had achieved the highest ranking on record (by the FootyMaths Institute system).
He considered the great Geelong run of 2007-08 and thought they would be better than the Collingwood team of 2010-11.

He also further detailed his thinking as per the below long form tweets, and using calculations around average winning margins, he determined that Geelong should have achieved a higher level of ranking points than Collingwood.

John's logic is as here:

Cats between 2007-09 lost 2 games in 44, C'wood from 2010-11 lost 2 games in 37 with 2 draws. Surely Geelong would have a higher ranking over that period than C'wood. Thinking about it more thou, what was Geelong ave winning margin vs expected in than period (44 games) compared to C'wood ave winning margin vs expected in the 37 games. Maybe that is why C'wood have ended up with a slightly higher ranking after R23 2011.


Graphically represented, both Collingwood and Geelong's ranking points over the selected years is as below.

So with only 5 rankings points between the peak ranks of these two teams, it would be hard to call one more superior than the other. But that said, the Geelong run in 2007 of 15 consecutive weeks gaining rankings points might just tip the balance their way.

That's 15 wins either against the predicted tip, or where they won over the calculated margin for 15 consecutive gains of ranking points (during the period 6 May 2007 to 19 Aug 2007). Average winning margin: 50.1 points. Which you could pretty much call a domination over opposition by Geelong. 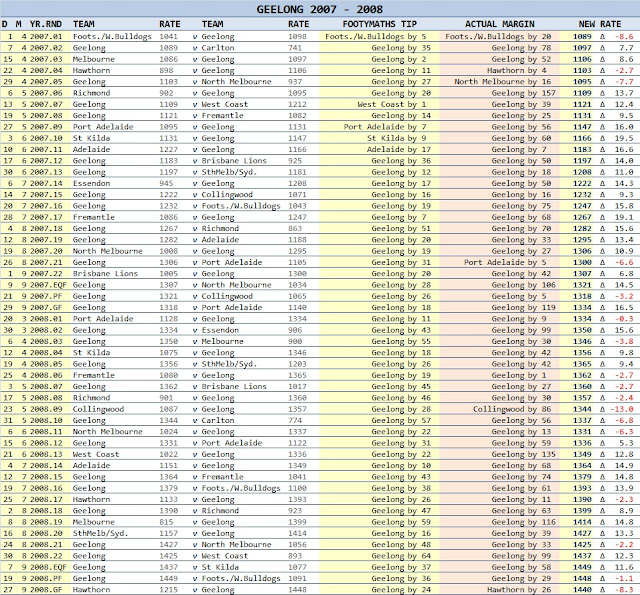 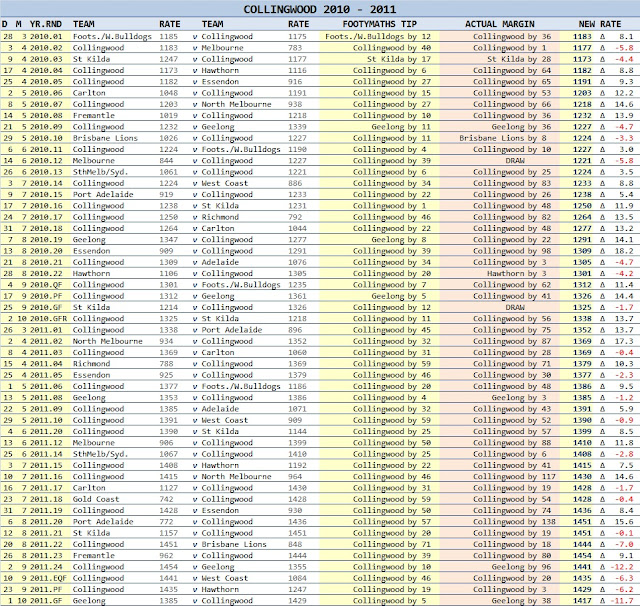