Notes: Once Were Warriors

Updated the table to clarify dates
The boffins here at the FootyMaths Institute were happy to receive some degree of validation to the blog content, with the following tweet...


@Amul82:  @AFLFootyMaths your stats are a literal translation of everything I've been saying about Collingwood since Grand Final day. #TruthHurts

We also considered that we may have been a bit harsh in jumping on the declining Pies, as per

@AFLFootyMaths: @Amul82 to be fair too, their peak rank score was v. high... I should check how high vs other teams thru history


Looking back at the ranking data, we indeed must concede that Collingwood have come from a very high ranking point level... So high in fact that it is the record for all 107 seasons in the database.

So we must admit we may have been a bit too hard on the Magpies of 2012*.
That said, there is no doubt that as a team that played in the 2011 finals, they are showing an alarming drop in performance.


The Best Teams Though History
To complete the dig through history, lets list the ranking leader (minimum 100 game period**).
A few things I have highlighted...
- the best rated team with the lowest ranking points: South Melbourne in 1913-14.

- the team with the highest ranking points: Collingwood in 2011-12.

- the team with the longest period rated as the best: the phenomenon that was the Norm Smith coached Melbourne Demons***. 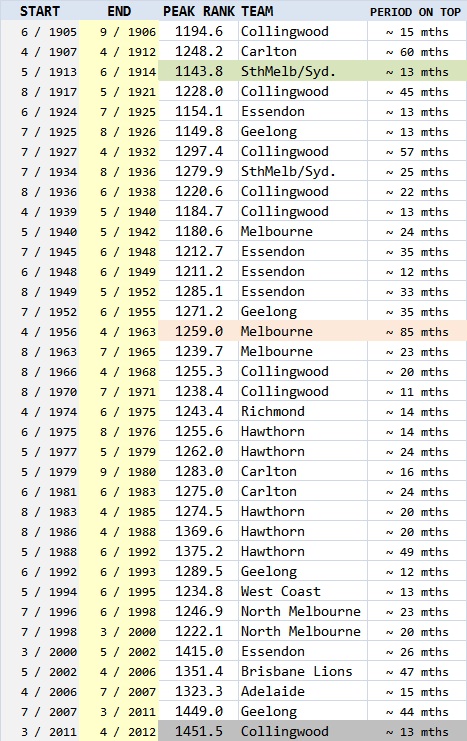 Looking at the progress of the top teams ranking points over the seasons also offers up this chart, which shows a steady increase over time.
Weather this is related to the mathematics of the model we are using, or is highlighting a trend related to competition disparity is unknown at time of publishing.

It could be a topic to revisit in future, as what instantly can be surmised as "highlighting a competitive disparity" is the huge leap in rank points in the approximate period 1986-1992, an era of VFL/AFL football known for its clubs with financial difficulties (highlighted in this post "Money Can Buy You Wins")


* And we are fully prepared to acknowledge errors and misjudgments, where valid (and have already done so in the past). We welcome constructive feedback.