Also known as: ...Just another round in the books.

Yes, the round of football that had its only major attraction as the Saturday night Hawks / Saints game has passed us by, and didn't it provide sterling football.
...Well, not really, though the Suns v Fremantle was looking at an upset for a while. But that was about it for edge of the seat footy.

Good to see Melbourne also run a competitive game at Kardinia Park... Coach Neeld safe for this year! Also good of Melbourne to play positive football, and help @demonblog out of the darkness he was heading into*.

Nearest the pin on our tips this week...
- West Coast ("Paterson's Curse"** , as studied by Mr. FootyMaths, @aftergrogblog) worked themselves into a win over North Melbourne by 25 points... 2 points off our tip of 27 points.

And apologies to all that read this blog on the back of @TheHolyBoot's recommendation***... sometimes we are close, but mostly not. Though in our defence, 8 tips for the week is OK, but just the one that was inside a ± 10 point variance.

The week went pretty much to form, bar Adelaide winning (again!) in Sydney****. That makes it 10 wins at the S.C.G. from 15 games.
Collingwood continue to suffer from being a highly ranked team that doesn't perform to expectations. A solid, but unspectacular, win over the Bulldogs has them again drop points.

Two more games in the Blow-out Bin this week, with Carlton and Essendon both winning by +60pt margins... and coincidentally, 67 points each of two.

Strongest Gains:
Essendon and Richmond both posting 14 point gains, and both teams are really showing some improvement this week. No other big gains of note.

Nice to see a small gain to Melbourne, as they arrest their season decline with a decent showing at Geelong.

The two bottom teams also picking up points, GWS for playing crap, but not crap enough for Carlton to steamroll them, and Gold Coast also for just missing the win vs Fremantle.

Biggest Drop:
Collingwood again lead the charge, with another 14pt drop. Again they were expected to win by more, and missed the mark.
Which brings Collingwood to a combined drop of 136pts since Round 23 2011. Some analysis of them has them rated as ~1300pt team, but currently playing as a 1150pt rated team (more on this to come later!) 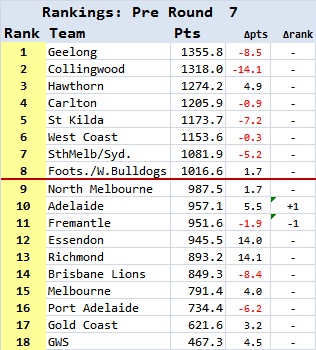 
Table Changes:
Adelaide winning away, and Fremantle not winning by enough against the Suns has them changing places again this week.

Expect more dancing about the table between them, and maybe even Essendon 'cutting in' soon as well.


* Apologies... yes there is nothing funny about depression... if anyone is depressed please consult specialists, or try BeyondBlue or such organisations.


** Tony Tea (aka @AfterGrogBlog, and Mr. FootyMaths) has been a keen observer of the West Coast phenomenon over the years (being a former 'Groper himself, though Demons fan) and has often commented on the free kick disparity at Subiaco... what he calls "Paterson's Curse".
A tweet here captures exactly the 'positive differential' the West Coast receive. 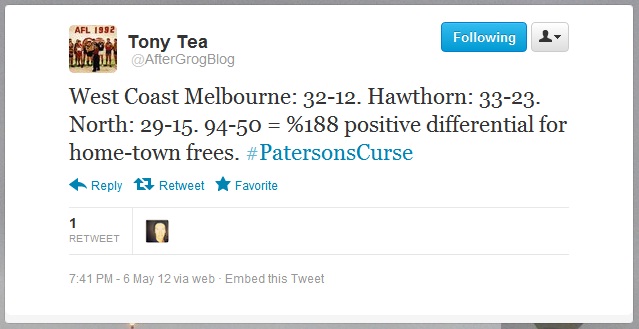 *** John (@TheHolyBoot) was so impressed by our accuracy last week that he encouraged others to tip (or maybe even bet?) after reading these pages... as per here. Thanks for the encouragement!

**** And please don't fall for any of that 'Adelaide undefeated in 7 years at the SCG crap either. They have only had 4 games there since 2005.