Also known as: ...I told you not to follow my tips this week.

Yes our advised warning not to use our tips has come home to roost with missed tips akimbo and our good shooting record of 76% correct out the window.
We tipped incorrectly out of 5 out of 9 times, missing Essendon, the GWS, Richmond, Adelaide and St Kilda.

Just a shocking return, with the upsets really hitting home and knocking the FootyMaths tip rate down from 76% to 71%.

Two more games in the Blow-out Bin this week, with Hawthorn and Essendon both winning by +60pt margins.

Strongest Gains:
Essendon and Richmond both posting big gains again, this week +19pts and +16pts respectively. Richmond return to the +900pt mark for the first time since 2009. More on these two teams later in the week.

Adelaide's big win also translates into a 13 point gain, and the breakthrough GWS victory also kicked them along by 9pts.

Collingwood finally arrested their decline after crushing Brisbane at the Gabba... +4pts for the Pies.

Biggest Drop:
Geelong threw another 16pts out the window with the loss at Footy Park.

West Coast's loss in Melbourne sees them lose 10 ranking points as the other notable loss for the week. 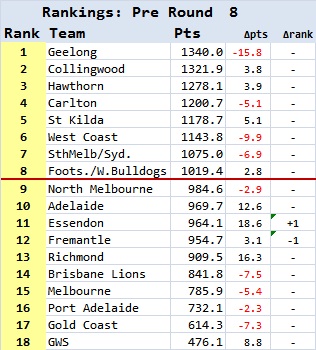 Table Changes:
Essendon jump up to 11th with that big win, and join 4 teams in a 1000-950pt bracket log-jam. Fremantle drop to 12th. (The other 2 teams are North Melbourne and Adelaide).

Richmond in 13th are now are putting space between them and the last 5 teams.