Round 8: A Double and Triple

A couple of big games over the weekend, with Grand Final Rematch (... not replay!) and the Dreamtime game were overshadowed by staggering losses. Both in the blow-outs suffered by Melbourne and the GWS, as well as the failure by Carlton to turn up, and in the wilting of North Melbourne.

Strongest Gains:
Adelaide winning strongly against a higher ranked Carlton booted them a big 19pts to be the best of the week.

As we mentioned earlier, the Essendon -v-Richmond Dreamtime game did result in one team dropping points (Richmond), and the other continuing their great run  this season... Essendon's win gave them another 14pt boost, and brings them close to the top 8.

The only other notable gain was to Sydney, with 9pts added after belting Melbourne.

Biggest Drop:
Carlton's early season stumble continues at-pace,with a loss of 14pts at the hands of the Crows.

Geelong are still not playing to expectations, and drop another 11pts.


Table Changes:
Adelaide climb to 9th on the back of the 19pt boost from defeating Carlton. There are now 5 teams in a 66pt grouping from 8th to 12th. 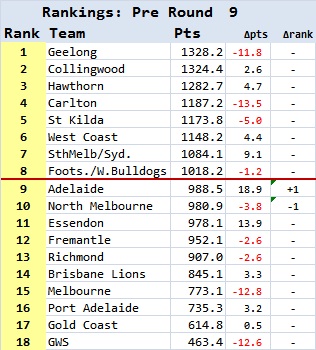 We could have the return of Collingwood as the best ranked team soon. Now there is only 4pts between them and the Cats.

Carlton, St, Kilda and West Coast are also separated by 39pts in the group of 4th to 6th place.

Also Port Adelaide and Melbourne are 40pts apart at the lower end of the table.