Also known as: ...who is the team that slots into the papers 'must talk about' window this week?

This big weekend of footy is now closed, and all of a sudden the papers are full of Richmond. Yeah, that's right, all of a sudden its Tigers, Tigers, Tigers! (and this, and this, all in one paper).
With a little perspective, they currently sit 12th on the AFL ladder, and 13th in our rankings. The world has not suddenly chosen Richmond as flag favourite... yet.

We would like to say the papers should be full of Collingwood stories after winning against Adelaide and regaining the FootyMaths table leadership (as below).
But that would be a redundant statement... as we can see here, here, here, here, here (!?!), here, here and here. The little paper (as in 'little of thought') has that angle covered!

There is your flag favourite, right there! Collingwood, plain and simple (insert obvious joke here).
You would also add in Adelaide and West Coast (as home finals will be important) and Essendon... surely!

And on the subject of the Bombers... how daft was this as a pre-game narrative? Surely any other angle was also worth a run?
Apologies to The Age for using you in the above links... you are by no means the worst offender!

Our return this week: A big 8 from 9, boosting the return rate to 73% correct.

Two more games in the Blow-out Bin this week, with a not unexpected Essendon crunching of the Giants by 66pts, and a completely unexpected Tigers triumph of the Hawks by 62pts.

Strongest Gains:
The biggest gain of the week comes from Richmond who have claimed their biggest scalp for a while. A 19pt pick-up after the 62 point win over the Hawks.

Essendon also gained 12pts after beating up on the new kids ...typical!

The last gain of nearly any significance was a 7pt increase by Port Adelaide, who are now eyeing off Melbourne in 15th.

Biggest Drop:
The Hawks, blown out of the air by Richmond, dropped 11pts to be this weeks biggest loser.

Geelong again lost 11 points (and the ladder leadership) after an unconvincing win against the Bulldogs.

Gold Coast, Melbourne and GWS all continue their free-fall in 2012, as they dropped 13pts, 10pts and 11pts respectively.


Table Changes:
While we can't call out "all change" as railways staff had in the past, we can say there has been plenty of movement this week... including a new ladder leader. 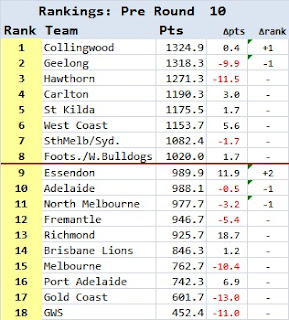 Collingwood re-take ownership of the table, with a 7pt margin over Geelong. Close margins may mean the top position may still change as the season progresses.

Essendon also climb 2 spots from 11th to 9th after this weeks win, and shuffle Adelaide and North Melbourne down the table.

The log-jam battling for 8th now consists of the Bulldogs down to Richmond in 13th, all separated by less than 100pts... Plenty of changes to come!

There is also only 108pts splitting Carlton in 4th from Sydney in 7th. Melbourne and Port Adelaide are also only 19pts apart at the foot of the table too.