The AFL season has now completed 6 rounds of a 23 round season, so we are basically at the Quarter Time break of the season.
So it is an appropriate time to check now how your team is performing this season according to our ranking data.

Last week, we published this detail about how teams are losing or gaining ranking points (I have updated the charts and table on this at the foot of this post).
But instead of using that data, another metric will be used (the rating of each team per game)
This will form the basis of the 'current form' of each team over the period of round 1 to round 6.

First, we accumulate and average the game ranking data to produce the table below. The key prima facie numbers from that table are listed under "R1-R6 FORM". This average is the current 6 game ranking performance, and effectively an indicator of form.

Remember of course that these numbers are also linked to the quality of the opposition played to date!

From these calculations, our data lists Hawthorn as the best team so far in 2012, with West Coast, Carlton and Geelong close behind in the +1200pt bracket. 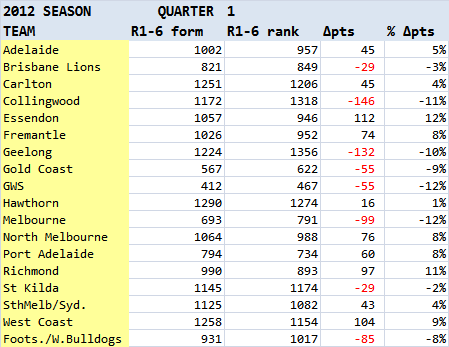 To do this, we benchmark the average game ranking number generated above (R1-6 form), against the ranking number the team has now (R1-6 rank) based on the cumulative data calculated over the seasons.
This then can give an indication if the team is playing above or below their current ranking, and you could suggest if there is improvement or not.

The table has this expressed in two ways, one as a points difference (Δpts), and also as a percentage difference (%Δpts). These are charted as below. 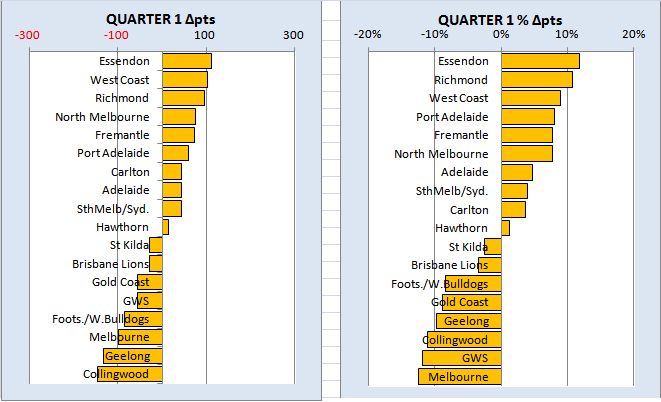 Looking at the raw points variance data, we can see that the 6 teams that have played out the first quarter of the season above their ranking (and therefore improving the most) are North Melbourne, West Coast, Port Adelaide, Richmond, Fremantle and Essendon.
These 5 teams are all playing (minimum) 50pts above their current ranking, or anywhere from 8% better than the current longer term ranking.

Which of course means that those teams will both be expected to drop further as the season progresses, unless they start to turn on the powerhouse performances they have shown over the last few seasons.
...and probably Geelong more-so than Collingwood, who have already lost a lot of points so far.

The other 3 teams under-performing noticeably are Melbourne, GWS, Gold Coast and the Western Bulldogs, all 8-12% under their current ranking.

Another interesting point is that Hawthorn are the top ranked team for the 6 rounds played, and only have a slight variance to their overall ranking points. This might indicate they are playing to form, and performing as expected. A 'happy team' indeed at the minute.

As mentioned before, here are the basic changes in ranking points from season start to end of the first quarter (these are revised numbers from last weeks comparison) 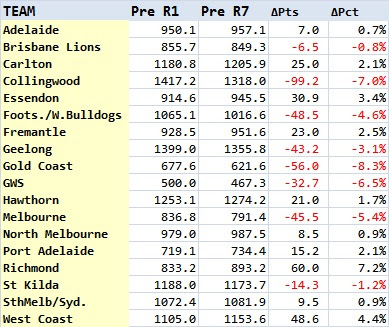 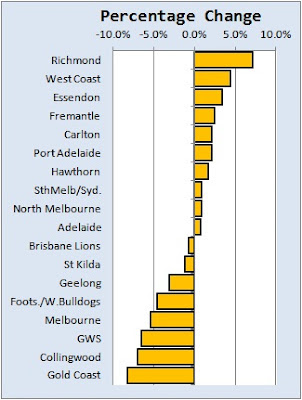 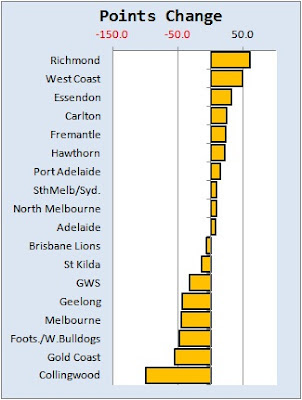