In our Round 12 review (Round 12: Thursday is the new Friday), we mentioned toward the foot of the post that there has been feedback coming in that our rankings were very slow to react and do not reflect current form.

While we continue to review the system and the inputs to the calculations, a few actions will be undertaken, as per here...


1) the blog and current system will continue as is until seasons end, to allow for consistency in tipping and ranking.
2) Additional data will be processed and published, with attenuated calculations that better reflect the current status of teams to date.

We feel the need to proceed 'as is', as it is not practical to change the system and rules mid-stream. Instead any changes will be considered at seasons end, and be ready for Season 2013.
What we can do differently though of the remainder of this year is offer an alternate ranking point calculation.
Publishing additional data will be for information, feedback and reasons of review and criticism only.
We encourage you, our loyal reader*, to consider and contribute as the remainder of the season progresses.


Option: 'Upping The Ante'
The most logical way to make the ratings more responsive to current form is to boost the weighting for each game, which thereby attributes more (or less) points to teams.

With that method locked in at double the rate, the following two tables are our starter for the review process.
The season would have started with the teams ranked as per here... 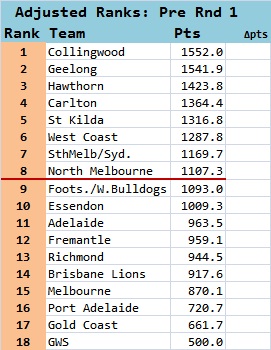 Which itself makes for interesting reading, as;
- The grand finalists were clearly head and shoulders better than anyone else.
- The top 8 teams as ranked are very much in line with the top 8 of the AFL ladder at the end of Season 2011, with the exceptions...
::West Coast lower in our estimation, as they were coming off a spoon year, and
::That the seasons 8th placed team (by the AFL ladder), Essendon, was according to our system only the 10th best.
- The teams outside the eight also follow sequence with the AFL table. There are some exceptions, such as Adelaide higher and Melbourne lower than AFL table, and these are due to late seasons performances in the main.

After 12 rounds, the current standings would be at left. 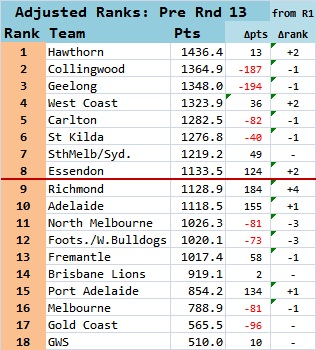 In this scenario we can see;
- Hawthorn take over leadership of the ranking table
- Collingwood and Geelong are still highly ranked, but have been heavily penalised through their losses or wins under the projected margins.
- West Coast are closing in on positions 3 and 2.
- Reward for a good season start is given to Essendon, Richmond and Adelaide (now 8th through 10th), and Port Adelaide. Note that more points have been attributed to Essendon and Richmond as they have had tougher draws than Adelaide (i.e. played better ranked opponents).
- Falls for North Melbourne, Gold Coast, Melbourne and the Bulldogs who have had poor showings in 2012.
- Interestingly, the GWS Giants are holding their own  under this scenario, with a modest 10pt increase to date.

Compare these more attenuated figures with the numbers generated from the current system we have employed since Round 1. 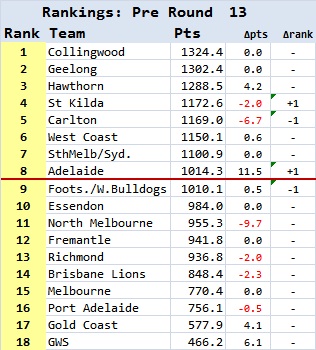 * Well... loyal reader may be underplaying it as this blog has a regular 30-40 hits each post. A modest readership, most appreciated.
Posted by The FMI at 17:12