The AFL community lost another Hall of Fame player this week, and Footscray lost its last Premiership Captain and Coach, and perhaps more, as Robert Murphy wrote this week in The Age.

I think about our club theme song all the time and its opening line — "Sons of the West" — asks me a more profound question.
If we are its sons and daughters, then who is our father? I don't think it's going a step too far to say that figure is Charlie. Yesterday, a football club lost its father, and as sons of that club we are in mourning.
Bob Murphy: The Age: 5 June 2012


The Age also has this wonderful Martin Flanagan tribute as well, and listed out his accomplishments as per here... 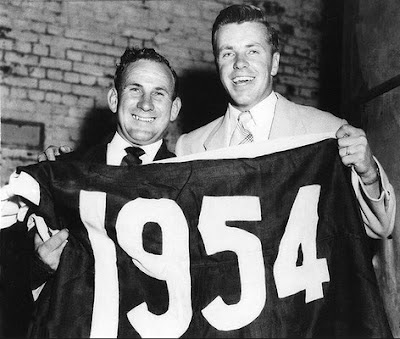 
The FootyMaths Institute would further like to mark the passing of a great so linked to Footscray, that it is difficult to think of the club without his influence.

Looking back at the both his playing and coaching days we can note he played a major role in bringing the Footscray Football Club their first (and only) VFL flag. Using the FootyMaths rankings system, we can also see that under his guidance as Captain/Coach, Footscray achieved their highest ever ranking of 1148.7pts in 1955. A ranking level not beaten by Footscray / Western Bulldogs until 2009.

Even in 1967-68 when he return to coaching, he again boosted their rankings (and by extrapolation, playing performance) in a time when they were battling, picking them up from a 750pt level to over 810pts.

What can't be measured by humble statistics is the intangible effects he had on football in the west;
- as a fan of the game he loved and played with admirable vigour and spirit,
- as a man who loved Footscray and the Football Club,
- as an administrator that dedicated himself to the task,
- as the true 'Bulldog through and through' that would be first to the players race after the team lost, because, as mentioned in the Flanagan article:


"There's plenty who want to know them after a win," he said. "Not too many want to speak to them when they lose".