Round 10: Good and Bad for Footy

What an extraordinary weekend of results!
- Brisbane brings big heart and vigour against the West Coast Eagles and score a great win in the dying stages at the Gabba

- Melbourne pops the Bombers bubble by displaying true endevour and spirit at the ball, while Essendon seemingly didn't want to play... outdoors... again.

- Port Adelaide, written off by the local press, get into gear and beat not only their own playing blues, but the footballing Blues as well. And as for Carlton, the wheels are off and the season is on the line.

- Sydney has an unexpected big win, defying the call they play 'boring football' (that they have become famous, or infamous, for). The Bulldogs are a work in progress and every once in a while such a loss should be expected.

- Richmond score their second big scalp in a row by defeating St. Kilda, and Jack Riewoldt brings a bag of 8 goals to begin a run for the Coleman Medal.

- North Melbourne show little heart against Hawthorn in Tassie, and do no favours in their quest to win over the state. And Lance Franklin kicks 13 to also stake a Coleman claim


Our tip return this week: A terrible 4 from 9, smacking our return rate to 70% correct... but no complaints, seeing the Bombers, Saints, Blues and Eagles lose is good for footy!

Four more games in the Blow-out Bin this week:
The 'As Predicted'
- Collingwood by 97 over the Gold Coast, and
- Geelong by 65 over the GWS.

- Sydney by 92 over the Bulldogs, and
- Hawthorn by 115 over North Melbourne (for the second biggest loss of the season to date, with the previous having been inflicted by North).

And there were also two more games with both teams scoring +100 points this week.

Beginning this week also is our Hall of Fame and Shame page, where we list the weeks biggest improver's and worst performers, as well as chart all the teams changes since the start of the year.  Check out where your team sits each week.

Strongest Gains:
The Tigers again claim the biggest gain of the week picking-up another 17pts after defeating St. Kilda.

A good week for the Adelaide teams, with Port Adelaide scoring 15pts (and much love from the footballing world) after defeating the Blues. Adelaide also scored 15pts after winning against Freo (though no love won there!).

The two teams with the biggest margins of the week also gained strongly, with Sydney and Hawthorn both positive double figures, 12pts and 10pts respectively.

Biggest Drop:
Carlton lose 15pts after their (shock?) loss against Port Adelaide. Carlton now very much of the boil, while Port continue to gain momentum.

The Hawks, with a big whacking of North Melbourne, gave North their biggest ranking point drop of  the season to date... a whopping 13pts.

Finally, the Bulldogs lost 10pts after the Sydney loss. Just a bad loss not needed, when they were appearing to have improved. 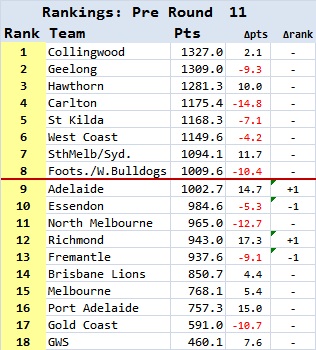 Essendon's life at 9th was short-lived as Adelaide re-take that spot, as well as break past the 1000pts barrier for the first time since.

Richmond skip above Fremantle to claim 12th as the crush for 8th is now only separated by only 72pts (from the Bulldogs down to Fremantle).

At the top of the board, the Pies extend their lead marginally to 18pts.

Positions 4 to 7 are also only 81 points apart, with Sydney seemingly likely to hold on to a top 8 position.

Next week... its a short round (or a bye week). Only 6 games to be played, but the premise of the FootyMaths rankings means that the number of games played is not so important.
Posted by The FMI at 09:29