Yes... six games stretched out over 4 days, in an AFL approved bore-a-thon. One game on Sunday, and one on the public holiday Monday... such a waste. The weekend should have been loaded up with more games, and the byes run through normal weekends.

Not a bad record again!

One game in the Blow-out Bin this week, as the Saints demoralised the Suns kiddies by 95 points.

Strongest Gains:
A moderate week sees the Swans gain 7pts this week, after that ho-hum thriller that never should have been game vs the Bombers.

Biggest Drop:
Its the Suns, still declining and dropping another 17pts down the chute. Seemingly never to improve, even with a season under the belt. 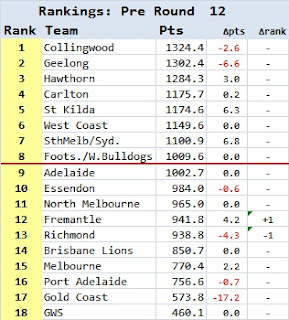 Table Changes:
Only 12 teams in action, and only 2 change places... Freo knock off Richmond at the MCG and take back 13th spot, in amongst the volatile positions of 8 to 13.

Of note... Hawthorn nudge closer to the top 2, the Saints are 1.1 points away from Carlton in 4th, and Gold Coast drift further toward the edge.