Also known as: ...the blockbusters were value, the rest was comedy.

The final bye week is finally behind us... and thank god for that. It did bring though two great games between Grand Final potentials (with Collingwood and Sydney prevailing in close ones), and also the "Prelude to a Spoon" game (also more popularly know as the $cully Game), as the boy Scully himself fronted his old fans bravely. Kudos for that, at least.

Plenty of comedy at the Dees - GWS game too with fake money being made for the boy... hopefully all in good spirit.

Finally, we questioned our own tipping ability when we said the close one was North to beat Adelaide. While we got the margin wrong, we at least got the selection right... which puts as 'on-par' with the Village Idiot at The Age tipping page here. No other Age tipster picked the Roos.

And coming out tomorrow... we also had our honour challenged by a celebrity tweeter. Watch this space for that post and detail!
How is that for sizzle!

Our tipping return this week was 3 correct from 6, knocking us down to 70% correct for the year.

One more game in the Blow-out Bin this week, with Melbourne's big over the GWS dumping them again into the bin... the GWS have now had 8 losses by 60 or more points.


@AFL:   It's a blowout at Etihad as the Lions run rampant ahead of their Hall of Fame night tonight. 114-56, two mins left ‪#afldogslions‬

We have always contended that a blow-out result should be at least 60pts or more, but the 58pt result at Etihad gets the 'blow-out' gong by the powers that be.
...And no mention of a blow-out on their tweet-feed relating to the Demons - Giants game, in case you were wondering.

And finally... no one responded on our Get This reference.
Disappointing, but not unexpected.

Strongest Gains:
Brisbane with the big win away over the Bulldogs gain 11pts to be the best of the week.

No other notable gain this week.
... Yep, that's right. Melbourne may have smacked the GWS, but you get very little reward for beating up on the kids under our system.

Biggest Drop:
The Western Bulldogs topsy-turvey season continues as it gets another big drop this week, losing 14pts.

The GWS also lose 10pts to be the only other significant drop of the week. 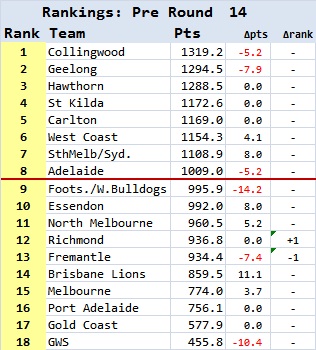 Table Changes:
The only move this week came from Fremantle, who dropped 7pts and fell from 12th to 13th, allowing Richmond to move up.
Nice work from the Tigers, who had the bye and still moved up.

The Bulldogs drop below the 1000pt mark as well, for the first time since May 2008. Is this truly the end of the golden run for the Woofers?

Worth noting too that the top two teams, Collingwood and Geelong, both lost points and bring the leadership that little bit closer to Hawthorn.
Only 30 points separates the top 3 teams! 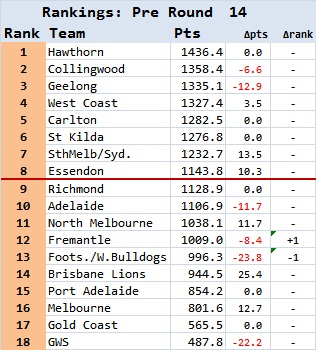 Finally, as mentioned last week in the Round 12 review, and during the week in our post 'Feedback and Input Welcome', we are using the remainder of the year to trial a more reactive rankings formula.

The table at right is produced by this system and is provided here for contrast to the above.

Note: This orange numbered table is a trial ranking list only, and is up for debate as to relevance vs the yellow numbered list. 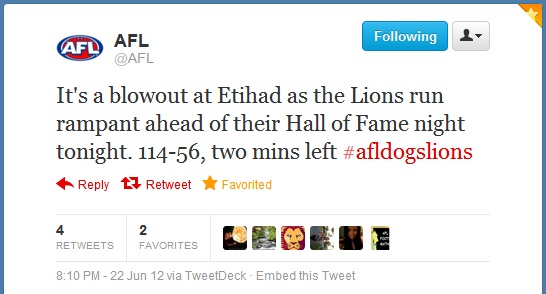