Round 14: Cheer Up Broadcasters!

"We return to our regular scheduled football program, with 9 games a week from now until September."

And what a big week it is, kicking off with the Friday Night blockbuster pitting two giants of the 80's together again... Carlton v Hawthorn. Free entry to the MCG for anyone who can prove they have Avco Finance or are carrying some Wynvale Wines, like these guys here.

Later in the round, there is also the dream fixture, the return of the NSW derby, the 'Sydney Shitfight' as GWS prepare to be pounded by the Swans again.


So to the Round 14 predictions...
With another tipping challenge accepted by two (YES, TWO!!!) twitter folk of some celebrity, we have had to crank up the most modern and up-to-date FootyMaths Supercomputer we have, using all the latest software and mathematical algorithms at our disposal.

And what a set of figures this week! Of the nine games, four are looking like train wrecks in the making, and we also have 'the close one' listed as...


The Western Bulldogs to defeat Essendon by the slimmest or margins - 1pt!

Hmmm... old Bessie might need a bit of valve clean out after that! (actual margin tipped was 0.4pts, which is the second closest margin tipped all year).

And as always, we reserve the right to shout "I tipped this!" if the Bulldogs get up by that 1 point, OR if the result is a draw. Because a 0.4pt margin is almost a draw, right?
It's our traditional 'bet each way'!

With those sort of lopsided games, we must tag this week "The Broadcasters Delight!"

A new addition:
And to further highlight how teams are going this season, blog commenter 'Mezzoculo' suggested a graphical way to represent teams past performances and future expectations... which we think is a great idea!
Currently, the past form is quite simple, and displayed below. Working up an automated index for predicting how teams will go in the next 3 matches is a little more complex, so it is left off the chart until it is perfected. 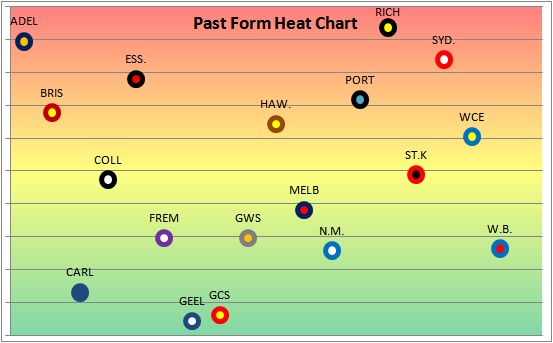 The chart above is determined from the results of each teams past 5 games, taking a cumulative movement of the rankings points over that period (Red indicates the team is 'on fire', Green is not performing so well) .

...and call us slightly suspicious, be we think Mezzoculo, is NOT A REAL NAME...!! [Insert dramatic musical sting here]
Posted by The FMI at 09:51