With all the byes out of the way, and more than half the AFL season gone, its time for the Half Time review.
So lets review how your team is performing this season according to our ranking data.

Each week we publish our teams rankings that are accumulated across seasons. We also list the teams net gain or loss of ranking points for the season on the Hall of Fame and Shame page.

As per the Quarter Time Review we posted after round 6, we will again be using a different metric to the rankings points. As above, the ranking points are across seasons and therefore not solely of this year.
To understand who is playing better this year only, we will be using the a metric that measures how a team played against each opponent on a week to week basis. In this way, we can see if a team performed above or below their ranking level on a game by game basis.
These numbers the get aggregated and averaged to create tables and charts that highlight how your team is performing this year.
Remember of course that these numbers are also linked to the quality of the opposition played to date!


The Second Quarter.
Looking at rounds 7 to 13 (6 games each team) we can generate the table as below.

Collingwood take over as the team with the best from from rounds 7 to 13, with Hawthorn second and both teams in the +1300pt bracket.
Next comes Geelong, Sydney, St Kilda and West Coast in the 1200-1100pt bracket (quite a gap behind), then Essendon, Richmond and Carlton in the 1100-1000pt bracket.

At the foot of the table are Melbourne in the 800-700pt bracket (but improved from Q1), Gold Coast in the  500-600pt bracket (slightly worse than Q1) and the GWS Giants in the -500pt bracket (and a slight improvement) 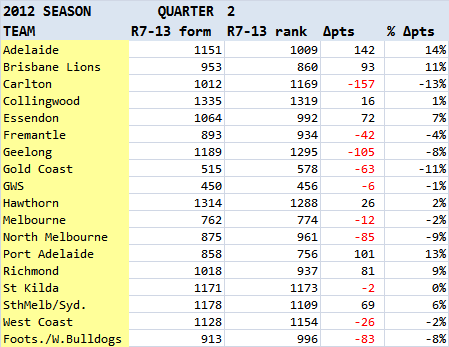 So one again, as we did in the Quarter Time Review, we chart changes vs the teams ranking after round 13, as per here. The left chart is the raw points difference between how teams have played subtracted from their ranking points, and the right chart expresses that number as a 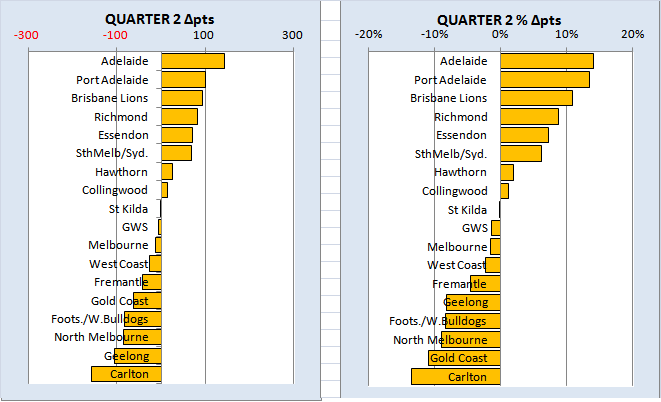 GWS seem to have stabilzed and performed as well as their ranking suggests. It will be interesting to see if that changes as the long, hard season progresses.


Interestingly, our placing of Hawthorn as the best team of the first half of 2012 is not alone, as
- Troy Wheatley's recent blog post "Are The Hawks Doing Better Than The Pies?" also crowns the Hawks as the premier team to date, and
- The BigFooty board also ranks the Hawks as the best to date via another Power Ranking system (despite the opinions of others posting there... which is a good reason why we don't post our results there!). 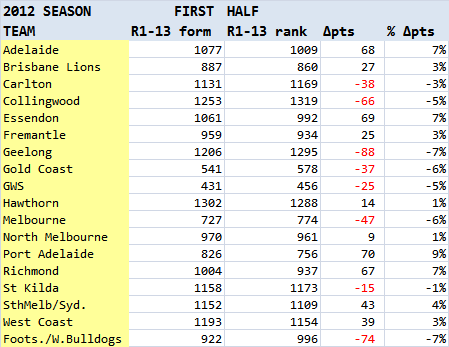 Performing above expectations are Port Adelaide (9%) and Richmond, Essendon and Adelaide (all 7%)

Under performing are Collingwood and the GWS (both -5%), Melbourne and Gold Coast (both -6%) and Geelong and the Western Bulldogs (both -7%) 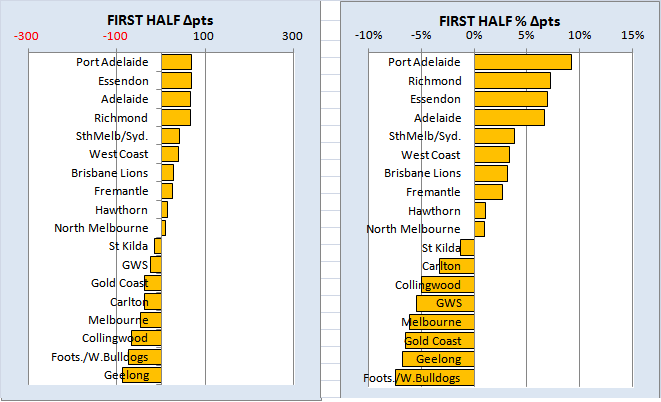