It has been rather remiss of us to have not written this before, but nonetheless, here it is... Are we seeing the end of the Cats era? 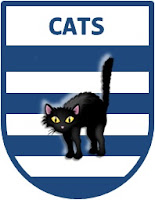 Will they land on their feet safely at seasons end with another preliminary final match and a tilt at a flag?
Or is this the season for the 'dead cat bounce'?


Your old mate, Tim Lane (variously over the years of ABC Radio, ABC Television, the Ten Network, The Age and 3AW) is paid to make calls of the game, and sometimes the big calls.
And one of our favourite tweeters, Mr.#FootyMaths himself, Tony Tea (@aftergrogblog) likes to remind us from time to time* of one of Tim's greatest big calls.
It is alledged that Mr Lane said, in this game, that it was the end of an era for Geelong.

As Tony Tea recalls it was said during the first quarter, after the Bulldogs kicked the first 3 goals. Geelong promptly went on to win the game by a lazy 101 points.


But is now the right time to make that call again?
By our rankings, Geelong are in the midst of a big slide, with 14 consecutive games of under-performing to expectations. They lead the loss table for points shed this season (at the foot of this page), and the below charts their fall.

That 14 game stretch where Geelong has lost rankings, eclipses a 12 game streak they had in 2009. During that year (a premiership year) they were somewhat disadvantaged by carrying a higher ranking points level, so were expected to always perform at an elite level.

The above clearly shows that Geelong are losing ranking status as the 2012 season progresses, but does it finally validate a call that it is the 'end of an era' for Geelong?

You could argue that it doesn't, by looking back to the 2009 Geelong premiership season.
This year, they have already lost only 1 more game than for all of 2009, so the job will be tougher having to fight for a flag from outside the top four.

Which brings us back to the start of the blog... What will happen to the Cats, and who will be the next Tim Lane and stand up to the mike and make the big call... Is it the end of an era for Geelong?