Round 14: Saturday Night's All Wrong

Also known as: ...one Saturday of pure torture, and some last minute Northern Exposure.

Once it was thought, Saturday Night's All Right For Fighting,* and after this week, it probably should revert to live 'TV Ringside'.

Well, when you think about it, two reasonably close Saturday games (Collingwood v Fremantle and Adelaide v Richmond) would suggest the Saturday was not so bad.
But the three other games (and in particular the Saturday night games) were nightmarish for the broadcasters (as we suggested in our preview).

In prime viewing, the margins were 84 and 94 points, which would have people turning off in droves. This is, of course, assuming anyone was watching after West Coast went to town on the Suns to the tune of 126 points.
Which completed the day of five games of football for an average margin on 70.4 points.
Try talking up that during a broadcast to the nation and beyond!

As to the rest of the round, if you tipped the favourite, you were headed in the right direction, with all of them getting up...

North Melbourne became the fox in the tipping hen house, with a spirited performance to knock off the Saints. The last game of the week goes against type, just to provide some sense of colour for the weekend. And as one tweeter put it:

Yes, and we are eating humble pie today after daring to tip the Bulldogs by the slimmest of margins... not our finest hour.
But as The Moorabool Wing Blog told us:

...which is a small consolation.
It is also worth noting that in the proposed altered tipping formula, the predicted result was for Essendon by 15pts.
Standby tipping competitions in 2013 when we implement the changes and lay seige to your prizes!

Finally, in our defence on the tips, we should also highlight that Adelaide defeated Richmond by 19 points, and that we tipped then to win by 18 points... so close to nailing one bang on!!


And coming out tomorrow... the results of our second celebrity tipping challenge - Man vs Woman v Machine!
...Sizzle!

Our tipping return this week was 7 correct from 9, knocking us back up to 71% correct for the year.

A big FOUR MORE games in the Blow-out Bin this week;
- Brisbane over Melbourne by 61pts to sneak in to the bin,
- Essendon by 84pts over the Bulldogs
- Sydney over the GWS by 94pts, (Sydneys biggest win for the year), and
- West Coast over the Gold Coast by 126pts to collect the biggest winning margin for the year.

And the last game was also notable as both teams scored over the ton, to climb up into that rarified atmosphere of the 100's Each Of Two file.

Strongest Gains:
Essendon collect 16pts from the big win over the Bulldogs, and break into the 1000pt  bracket.

Brisbane bring in 13pts for beating Melbourne who maybe looked like a show at some stage... if your optimistic.

Finally, the only other notable gain this week was from Hawthorn, with a handy 10pts from defeating Carlton.

Biggest Drop:
The Western Bulldogs collect another badge of shame as it gets another big drop this week, losing a huge 19pts.

The other usual suspects, the GWS and the Gold Coast also lose points for being thoroughly belted... a 17pt drop to the Suns and an 11pt drop to the Giants. 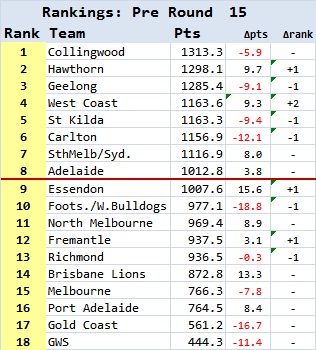 Table Changes:
As much as Essendon scored the biggest points move, the big news this week sits with the West Coast Eagles, who jump two places up 4th.

This shuffles St Kilda and Carlton down one place each to 5th and 6th. Still very tight between 4th and 6th!

Hawthorn continue their steady, consistent season and are on the verge of breaking 1300pts and taking top spot from Collingwood.
Only 15pts splits the two!

Outside the top 8, Essendon are now into the 1000pt bracket (for the first time since early 2006), have secured 9th from the Bulldogs, and are also 5 pts from Adelaide and 8th place.

Fremantle, who last week fell from 12th to 13th (allowing Richmond to move up) have this week reclaimed 12th, with the Tigers slipping back.


Finally...
To avoid confusion, the proposed 'adjusted rankings' tables and commentary will be / has been moved to a new page: Project: Renewal. 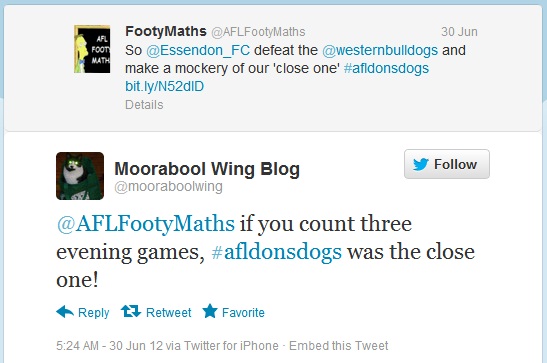