Round 15: Fourth in July

Also known as: ...Looking for Lazarus with a triple by-pass.

In this edition of the FootyMaths Institutes blog, comes the amazing news that in the round just after the 4th of July we have our 4th different rankings leader.
Which means only one thing... Collingwood have been dumped from the top and we have a new 'best team in the AFL'!


...Is that cheering we can hear coming from the blog-o-sphere?  Surely not!

With Collingwood displaced, we join two other rankings pages in having the Magpies as not the best team going around...

1. Troy Wheatley's "The Wooden Finger Depot" Power Rankings has had Hawthorn as the top team for quite a while, with Collingwood in 4th place (after round 14), and

2. A BigFooty Power Rankings system run by 'Roby' also has Collingwood not top of the table (down at 5th) and Hawthorn as the best team.


While that is a good thing (to have some sense of parity between at least 3 rankings systems*), I can't say I will be happy to cop the abuse that Roby seems too.

So, will Collingwood have the intestinal fortitude to rise again to the top of the rankings?
Will we see another** footballing 'Lazarus with a triple by-pass' by the Pies?


And coming out tomorrow... the results of our third Man v Machine Tipping Challenge...
...Sizzle!


Fifteenth round results:
Our tipping return this week was a big 8 correct from 9 (missing Carlton, who most of the football world also missed), which pushed us back up to 72% correct for the year.

Two more games in the Blow-out Bin this week, one expected and one a bit of embarrassment for a top 4 contender;
- Hawthorn over the GWS by 162 points, (the biggest blow-out of the year), and
- Essendon downed by 71 points by St Kilda.

In a week where most of the changes were only moderate, the Hawks beating up on the kids from Western Sydney is the big mover of the week, but only by 11pts. The smallest 'Strongest Gain' in a full round of football all year.

The next 3 biggest gains were: 9pts gained by Adelaide after defeating Port Adelaide, and St Kilda who despatched the Bombers, plus an 8pt gain by the Gold Coast who went close to knocking off Geelong.

The Giants lose not only some dignity, but also 21pts off their ranking after the weekends humiliating defeat. We assume the spin from AFL HQ might be "They will be better for the loss"?

The Bulldogs failure in the West has handed then another 17pt downgrade, as their season begins to unravel.

The last 3 major points-losses this week were to Collingwood and Geelong (yes Cats fans, if you win but dont perform as expected, you get penalised), who both lost 11pts, and Essendon who lost 9pts. 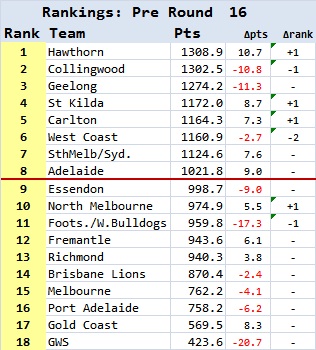 Table Changes:
We have a new ladder leader!!!
Hawthorn are now the best team in the AFL, taking over from Collingwood, with a margin of just 6.4pts. They also break through the 13000pt barrier for the first time since June 1990.

How long will they hold top spot?
Looking forward to next week, we can say they may hold it for one more week as they have an 'easy game' vs the Bulldogs, while Collingwood play Geelong.

The Hawks are now the 4th leader of our rankings ladder and the third team to take the ascendancy, noting of course that Collingwood were top and displaced by Geelong, but the regained the lead.

The Saints big win over sees them jump up to 4th, with the Eagles dropping down to 6th... their stay at 4th over very quickly. Carlton also rise one place to 5th after a great win over the Magpies.

Outside the top 8, Essendon went into the 1000pt bracket last week, but have dropped out straight away.
North Melbourne collect 10th place after the Western Bulldogs lost badly on Sunday.


Finally...
The proposed 'adjusted rankings' tables and commentary has been moved to a new page: Project: Renewal.
All the updates are there (or soon will be), and these describe this season under our new proposed algorithms. Comment away!

* Let us know if you come across any other AFL rankings sites... happy to follow them as well.

** Would you say the Cats 2011 premiership year was also a 'Lazarus with a triple by-pass' moment, given they were written off as too old?