This week saw final confirmation of where this years flag will go to. All season we have had Collingwood and Hawthorn as in the top three teams for the year.
They were joined by Geelong, but after this weekend, it might be a bridge too far for them now.

Another team that has consistently performed, and did so again on the weekend, was Sydney. No longer flying under the radar, but now in flag contentions... steadfast and consistent all season.

Adelaide have had a dream draw tho help bump them up the ladder, so we still question them come finals time... though home finals will help. West Coast will not be helped in their flag push, slipping out of the top 4 of the AFL ladder and losing the double chance.


But after the weekend that was, you can be sure that the media spotlight will fall on two key moments...
1. That fairy-tale moment:
What a great comeback by the Suns, and another season of disappointment for the Tigers. Are their finals hopes gone now?


2. Captain Judd, in the Stadium, with the chicken wing.
No, not a cluedo outcome, but a shocking act.
For one of the most decorated players in the game to have committed such an act... a loss of the gloss of 'brand Judd'. You know it will be scruitinised (with an extreme scruit) all week.
We expect a nice vacation for No. 5, and some of the goodwill of all non-Carlton fans of Chris Judd to have been spent. Will an appearance of Mrs Judd be able to return the sheen to husband Chris again?


And coming out tomorrow... the results of our fourth Man v Machine Tipping Challenge...
...Sizzle!

And also this week... a trip into history, for a return visit to Switzerland, Victoria.


Sixteenth round results:
Our tipping return this week was 6 from 9 (missing Carlton, the Suns and West Coast), which dropped us back to 72% correct for the year.

Two more games in the Blow-out Bin this week, one expected and the other highlighting a season off the rails;
- Hawthorn over the Bulldogs by 72 points, and
- Adelaide over the Giants (again, the Giants) by 119 points.

Strongest Gains:
The biggest gain of the week came form the match of the round... Sydney's grand win in the west boosted them 14pts as the best of the week.

Hawthorn and North Melbourne also picked up 14pts (actual 13.6, Sydney actual 14.2) to be the weekends other best teams, along with Adelaide who collected 11pts.

Worth noting the Gold Coast's win also netted them 8pts.

The Giants again suffered a big defeat and an subsequent 26pts off their ranking. They may be kids battling against seasoned professionals, but it must be making the AFL HQ boffins think 'this is not helping the brand'

The Bulldogs failure against the Hawks has handed then another 19pt downgrade, as their season unravels.

Other big losses (in a weekend of big rankings points losses) were to Carlton who lost 12pts, Geelong that lost 12pts and the West Coast who lost 10pts. 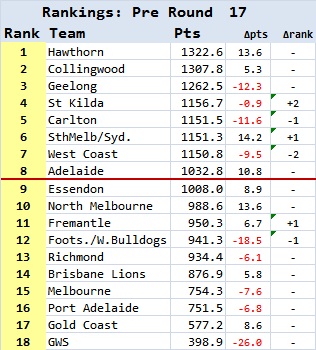 Table Changes:
Collingwood's win was not enough to help it regain leadership, as Hawthorn boosted their lead after defeating the Bulldogs.


The game out west also was a win for the Swans in our rankings system, as they moved up to 6th and West Coast down to 7th.
Also moving up was St. Kilda, up from 6th, replacing Carlton.
Positions 4 to 7 now separated by less than 6 points.

Outside the top 8, Fremantle jump over the fading fast Bulldogs, and into 11th.
The 12th placed Bulldogs were once 8th, and now find themselves in danger of falling to 13th in the next few weeks.


Finally...
The proposed 'adjusted rankings' tables and commentary has been moved to a new page: Project: Renewal.
All the updates are there (or soon will be), and these describe this season under our new proposed algorithms. Comment away!