Round 18: Its All About Timing

Also known as: ...Now is the time that finalists are decided,
or ...His Andrew-ness must be thinking 'Gee, I'm glad to be away from that rubbish'.

Timing... its what changes things from good to great. Like a fine wine, great joke or perfectly driven cover drive for four.

Or its how you hide bad news, like a 5pm Friday press release announcing a new tax, or perhaps scheduling a really bad (car crash bad) week of football in behind the Olympic opening ceremony.

Some timings we have noticed this week about the AFL:
- Hawthorn continue to turn on the form leading into the finals, with +10pt ranking point increases in the last 5 games. Heading into strong premiership favourites now.

- Essendon have had great early season run where they scored four +10pt increase in a row, and now have suffered 3 weeks of the last 4 where they have lost -8pts each week. That, and they have had 3 losses in the last 4 weeks by +10 goal margins... all at the wrong time of the season. Likely to miss the finals after such a good start.

- Adelaide also into a purple patch, with a four week run of +9pt increases. Locking in a top 4 finish.

- Sydney flying home with another 4 week run of +12pt increases, coupled with an eight game winning streak. A real challenger for the flag, locked in for the top 4.

- North Melbourne charging into the finals with six wins from the last seven games (and one 2 point loss).

It is also opportune timing for the worst week of football for the season, with the opening of the 2012 London Olympics masking this week from more bad press. You would like to think that this week was planned to time perfectly, but we doubt it.

It is also in-opportune timing for senior AFL staff to be absent, with disaster seasons for the GWS and Suns causing even more rumblings and grumblings about their worth in the league. The @AFLStatsGuys reminded us of the tragic GWS season as below:


Saturday night @GWS_Giants became the first side since Fitzroy in 1996 to lose four games in the same season by more than 100 points.
— AFL Statisticians (@AFLStatsGuys) July 29, 2012


Prior to @GWS_Giants this season, only three teams in history have lost four games in the same season by more than 100 points.
— AFL Statisticians (@AFLStatsGuys) July 29, 2012

So, why do we say it is the worst week of football this season?

a- That this round had the second highest result for the closest tipped game of the week (Fremantle by 11 points).

b- The round was also equal third for average tipped margins across all games (average 35 points).

2. The actual results from the round also highlighted:

a- The average margin of the weekends games was the worst for the season (average of  63.6 points, nearest to this was 59.3 points in Round 14).

b- five teams were defeated by 60 points or more (the Giants, Lions, Bombers, Bulldogs and the Suns), which is the worst week of contributions to the  Blow-out Bin this season.


Eighteenth round results:
Our tipping return this week was a perfect 9 from 9, which drives us up to 74%.

FIVE more games in the Blow-out Bin this week,
- the now regulation (and expected) Giants loss of the week, this time by 120 points to Collingwood,
- West Coast's return to form saw then defeat Brisbane by 98 points,
- Another great big defeat to Essendon, this time by 94 points inflicted by Hawthorn, and
- St. Kilda take the Bulldogs to the cleaners and score a big 76 point win, and
- finally, Sydney defeat the Gold Coast by 72 points.

Strongest Gains:
The biggest gain of the week again goes to the Hawks, after another Friday night 'match of the round' thumping of Essendon. This puts them clearly as our best ranked team.

The other notable achievements of the round were +12pts to Sydney, +11pts to North Melbourne and +10pts to Adelaide.

The Giants make it 4 from the last 4 games as our biggest loser of the week. All totalled this season, they have lost 160pts and are assured of the title of worst opening season for a new team ever.

The other two big losses were to the Western Bulldogs whose season continues to crash around them, this week another -17pts, as well as a -12pts change to Melbourne and -10pts to Essendon. 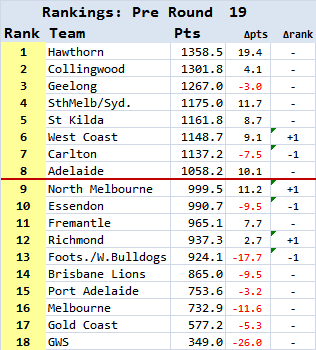 Table Changes:
Hawthorn now lead the table by 40pts over Collingwood, who are another +30pts ahead of Geelong.

West Coast climb one position to 6th as Carlton keep on slipping down the table (after at one stage being the 4th ranked team).

North Melbourne's great run of late season form sees them rise up to 9th, tipping the Bombers back to 10th.

Outside the top 8, the decline of the Bulldogs continues as they fall to 13th. The former 8th placed team is having a bad season, if we may underplay one result this week.


Finally...
The proposed 'adjusted rankings' tables and commentary has been moved to a new page: Project: Renewal.
All the updates are there (or soon will be), and these describe this season under our new proposed algorithms. Comment away!
Posted by The FMI at 11:37