Round 17: Made or Broken

In the key decisive games of the weekend, we had some great football, as well as some confirmations and a few more question marks... such as:

- Hawthorn confirmed they are the best team running about out there now, just too organised for Collingwood, who should hold a top 4 spot.

- Geelong can never be under-estimated, and Essendon are perhaps over-estimated. And we wont hear of 'hampered by injury', either. Every team (bar the new teams) has the same number of players on the playing list.

- Adelaide at home will be tough to beat, and West Coast are a top 8 team that may be a step away from a top 4 team. Be wary of both teams with home finals.

- Carlton struggled over the out-of form Dogs, and that performance might define the Blues this year. Nearly but not quite. We can hear the journos already... "Will Brett Ratten survive if they miss the finals?".

- Sydney are a genuine flag chance, but not shoe-ins as there is still a question mark over MCG (big ground) form. The Saints season also looking to slip past them.

- With a window to the top 8, two emerging teams went hell for leather, and produced one of the best days of footy. North Melbourne did enough, and took the reward of a top 8 berth...can they hold on? Richmond, it looks like your season may be done.


Seventeenth round results:
Our tipping return this week was 7 from 9 (missing Adelaide and Port Adelaide), we remain at 72% correct for the year with little scope for change.

Two more games in the Blow-out Bin this week, one expected and the other highlighting a season off the rails;
- the now regulation (and expected) Giants loss of the week, this time by 95 points to Fremantle, and
- the Geelong make-or-break win over Essendon, by 67 points.

Strongest Gains:
The biggest gain of the week came from the match of the round... The high flying Hawks win over the Magpies secures them another 17pts and also looks to lock away top spot for the year.

Adelaide went close to best performer with 15pts gained over the Eagles. The only other big improver was Sydney, with a nice 12pt boost.

The Giants are making a habit of losing rank points... another 24pts this week. Given we started then at 500pts to protect them, the loss of points is still terrible. If they were initially allocated 1000pts (as were the Suns in 2011), they would be 551pts now. The Suns finished 2011 on 677pts, so we consider the GWS a bigger failure than the Suns.

The other two big losses were to West Coast who lost 11pts, and Collingwood who lost 10pts. 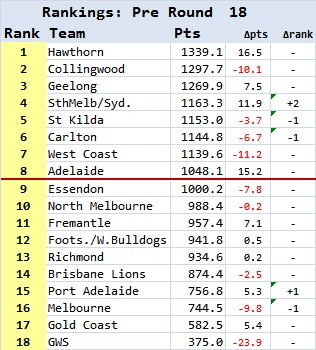 Table Changes:
Hawthorn confirm they are the best team by taking the Magpies to task and getting a big win. They now lead the table by 40pts, and are almost assured of finishing the season as the best team of the AFL.

Sydney also improve to 4th, with the Saints and Blues dropping one place each. The margin between 4th and 7th is only 23pts.

Adelaide's win and Essendon's loss should pretty much set our top 8 in place... a 48pt gap might be a bridge too far for the Bombers.

Outside the top 8, very little change, other than Port Adelaide leaping over Melbourne and into 15th place.
This puts Melbourne as the worst ranked team that has had more than 2 years in the AFL, as forecast on Saturday by Mr Footymaths, @AfterGrogBlog?


Excluding the Newbies, has there been a worst team than Melbourne in 2012? #AFLDeesPort
— Tony Tea (@AfterGrogBlog) July 21, 2012

Finally...
The proposed 'adjusted rankings' tables and commentary has been moved to a new page: Project: Renewal.
All the updates are there (or soon will be), and these describe this season under our new proposed algorithms. Comment away!
Posted by The FMI at 11:28