With or Without New

With the two new 'franchises' having joined the AFL in 2011 and 2012, there is a bit of talk about how well, or otherwise, they are going, if they are 'hurting the brand' etc.

We are not about to tackle such qualitative, nebulous qualities such as 'effect on the brand' etc, because at the end of the day, loyal football fans keep going, and generation after generation of kids keep playing Australian Football... its in the fabric of the nation. Football endures.

We can evaluate and compare the more quantitative data relating to the performances of the new teams and the effects on the competition.

And for the record, we are unashamedly FOR the new teams entering the AFL... growth of the game beyond Melbourne and the 'southern states' is good for Australian Football. There is no doubt that the introduction of any new team was going to be tough. The mechanism or location of the teams is not for debate here.

And to keep things simple, lets not call the new teams 'franchises'. They are development teams. They are in developing markets for football, they are developing themselves as organisations and forging links to their communities, and largely the playing list is composed of developing players (hat tip to John Carr for that term).


Effects on the 2012 Ladder
We were inspired to write this after the below tweet from Dan Fisher, and it seemed a simple enough task to do...


Out of curiosity does anyone know what the ladder would look like taking out results against GC and GWS. #AFL #AFL360
— Dan (@Fisherking79) July 23, 2012


By extracting all the results from matches involving the GWS and the Suns, we can create a 16 team ladder as below right. Note, there is an uneven amount of games played, so Match Ratio is employed to sort the teams to order. (Table is clickable if you need to view it in a larger format).

When we compare this to the current AFL ladder (below left) there would be really not much change in ladder positions if the development teams were removed.

The top 4 teams would remain unchanged on the ladder, and a few other places would exchange bordering the 8, with Fremantle getting into the finals slot, and North Melbourne dropping out.

Most penalised in terms of wins erased would be Adelaide, North Melbourne and Brisbane, who all have 3 wins expunged from their record.
Despite this, Adelaide would retain a high table position regardless. North and the Lions on the other hand would suffer, with the Kangaroos dropping from 8th to 10th. Brisbane would hold 13th, but would become 2 games away from 12th, not as now where percentage is the difference.

All teams percentages (other than Richmond) have decreased as well. Significant percentage losses would be to...   North Melbourne (-20%), Adelaide (-15%), Brisbane (-14%),  Hawthorn and West Coast (-12% each), and Sydney and Fremantle (-11% each).
The above highlights the notion that the matches are 'percentage boosters'.

What can't be quantified here also is the idea that a team playing a development team can be played 'into form'... which with more work we could determine... but not today.

Finally, this exercise, though irrelevant to the reality of the AFL ladder, would be worth reviewing at season's end. We may find some teams are lucky to be in the finals on the back of a softer draw.


Effects on Percentage
In preparing this blog post, another tweet scrolled through our feed from a regular contributor, John.


How have teams fared against the development teams these past 2 years? Look away Tiger fans...this is ugly! twitter.com/TheHolyBoot/st…
— John (@TheHolyBoot) July 23, 2012

This again further highlights the percentage boosting effect that the development teams have had.

Must say, we do like the John's description too "Look away Tiger fans...this is ugly!". The Coodabeen Champions might even suggest the Gold Coast Suns have the wood on Richmond!


First Seasons
If we look back at the first seasons of all clubs that have arrived into the VFL/AFL over the years, we can assess there performance two ways. First is the traditional win/loss/percentage method as per the VFL/AFL tables

Alternatively, we can apply our rankings method to the teams as a comparison.

And to make the comparison fair, we will use the first 16 games as our benchmark (as this is where the GWS are now). 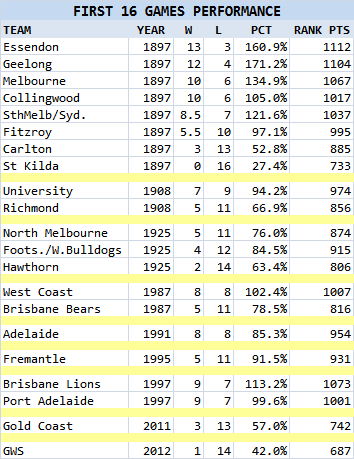 This then creates the table as per right.

Which shows that there has been some 'teething' trouble with all new clubs, and the most recent two clubs have comparable performances with historical results. What is interesting though is the big loss of ranking points that the Suns and GWS (in particular) have suffered.

There can be grounds for the Saints poor percentage and rank point drop off being related to the scoring patterns of the day (where a winning score were in the order of 45 points, and the Saints average score was 20 points). That, the fact that St Kilda was the weaket of the teams to have broken away from the VFA to form the VFL.

In the end, though, 'you cant make an omelette without cracking a few eggs', so there must be heartache for the new teams as they enter. And in this era of professionalism, there will be a the odd dozen broken by the ruthless professionals as they beat up the development teams.
Posted by The FMI at 09:46