Rohan Connolly has done it again... another tweet (in reply to our blog about unlucky Richmond), and another bit of history to check.

So, here is Fitzroy's 1978 season (with the close ones highlighted)... 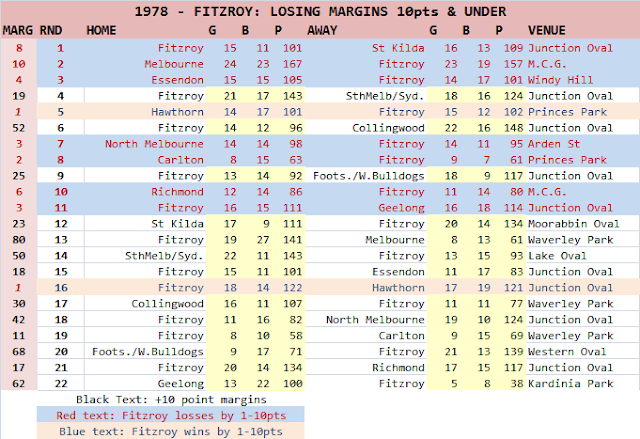 What a cruel game football can be. That string of 7 close losses in the first 11 games dropped Fitzroy to last spot on the table (12th), and in a position that few teams could recover from.

They finished out the season in 9th, with an 8-14 record.
If all of this narrow losses would have been converted to wins, then the 'Roys, under then coach Graham Campbell would have been 15-7, and ensconced in the final 5.

Thankfully for Fitzroy fans, 1979 brought a new coach, Bill Stephen who did exactly what the 1978 team couldn't, and rack up a 15-7 record to make the finals.
That finals series they destroyed Essendon, then came unstuck in the Semi Final, being defeated by Collingwood, the eventual runners-up.


Not Alone
Fitzroy though, were not alone in running up so many close losses by 10 points or less.
The Fremantle side of 2008 had 8 such occasions of just missing the mark, and are the undisputed king of this category.
That said, Fitzroy have had two seasons of losing 7 matches (1978 and 1946), so we will leave it to you to determine just which team really takes this unwanted crown.

Celebrations all round at the FootyMaths Institute, with magnums of 'Appletiser' being sprayed about, Formula 1 style... living the life!

And a big thanks to you -loyal reader- for continuing to come back, despite the rubbish we put of for your entertainment, derision and disdain.
Posted by The FMI at 09:00