A Tale of Two Seasons

Season 2012 has been one of 'so close, but so far away' for one club in particular, with many near misses seemingly costing them a finals chance (Yep... not a done deal yet, but close).

Tigers' fans, we feel your pain.

This post, prompted by the series of tweets below from respected Age journalist Rohan Connolly (@rohan_connolly), will look at this season for Richmond, and reflect on similar seasons from years past.
And we would also like to put it here, up front, that this is not a dig a Rohan Connolly in any way, but just that his musings were a stepping-off point for us to look back at the records.

To begin, lest review the motive for this post.
First, Rohan Connolly reminded distraught Tiger fans via twitter that after another close loss, that Richmond still held hope for a brighter future, as per the link to his Age article "Nearly Out, But Not Down".

Then he follows it up with the below two tweets... that the Tigers have lost 9 games by 21 points or less, and a suggestion that such an event would be rare.


Make that nine games by 21 points or less ... fine line! Just a couple of errors and a bit of steadiness every time. Well done Blues, btw.
— Rohan Connolly (@rohan_connolly) July 28, 2012

So with those tweets we need to look at the Tigers' 9 losses by 21 points or under in 2012, as per the below table), and then look at others in the past with similar histories.

Looking back through the full archive of VFL/AFL matches the table below shows the times that other teams have also come so close to winning 9 or more matches. 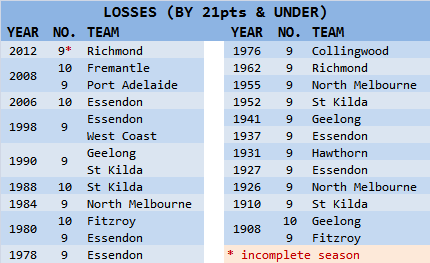 
Finally, Rohan completed his series of tweets with this;


For the record, I remember Essendon losing nine by 14pts or less in 1980 because I was a 15yo kid who suffered absolute torment as a result!
— Rohan Connolly (@rohan_connolly) July 28, 2012

So, here are those losses from 1980 listed here;

and the historical comparison as well.

Which highlights that the torture that the young Master Connolly had experienced as a 15 year old was only previously visited upon season 1908's Fitzroy supporters... At least, those lucky enough to have been at the games in the pre-television, pre-radio era.

With apologies to Richmond fans who have been reminded
of a season of 'what could have been' by this post,
and also to those Essendon fans who remember season 1980.


Note: above data includes all home and away matches and finals matches inclusive.
Posted by The FMI at 09:17